Is romantic kissing a cultural universal? According to cross-cultural researchers, the answer, definitively, is no. While western societies often take for granted the notion that romantic partners express their desire for one another through kissing, most notably the open-mouthed “French kiss”, this is not a universal practice around the world. On the contrary, according to the findings of a well-known cross-cultural study, the practice of romantic kissing is conspicuously absent in a majority of world cultures.

In 2015, a group of social scientists published a research report on this topic in American Anthropologist. The researchers utilized eHRAF World Cultures, the Standard Cross-Cultural Sample, and a selective ethnographic survey to document the presence or absence of the romantic–sexual kiss (Jankowiak, et al, 2015). They based their research on a set of 168 cultures compiled from eHRAF World Cultures (128 cultures) as well as the SCCS (27 cultures) and by surveying 88 ethnographers (13 cultures). Global ethnographic evidence suggests that romantic kissing is common in only 46% (77) of the cultures sampled. The remaining 54% (91) of cultures demonstrate no evidence of romantic kissing.

The intriguing topic of romantic kissing has garnered interest within and beyond the academic community. HRAF’s digital anthropologist, Dr. Francine Barone, wrote an article titled “Romantic or disgusting? Passionate kissing is not a human universal” (HRAF, July 17, 2015). This continues to be among the most popular articles on the HRAF homepage. Shortly thereafter, National Public Radio (NPR) covered the topic in a story titled “Not Everybody Likes Kissing” (NPR, August 12, 2015). The author of the NPR story, Dr. Jessie Rack, holds a PhD in Ecology & Evolutionary Biology from the University of Connecticut and serves as the Program Director for the Natural History Institute.

HRAF’s member services manager, Matthew Longcore, decided to introduce this topic to his students at the University of Connecticut, where he teaches anthropology and archaeology as an adjunct faculty member. The topic seemed well suited to ANTH 1000 Peoples and Cultures of the World, an introductory course in cultural anthropology. This fall semester, Longcore is teaching two sections of ANTH 1000 at the UConn Stamford campus. In both sections, student teams make presentations on anthropological topics covered by NPR. UConn is a HRAF member institution with access to the eHRAF World Cultures database. Students in ANTH 1000 use eHRAF World Cultures for ethnographic research and student teams make presentations based on their findings from eHRAF Workbook activities designed to complement introductory courses in cultural anthropology.

An examination of cultural universals and, conversely, cultural practices deemed not to be universal, feature prominently in ANTH 1000. The textbook for the course, Cultural Anthropology: An Applied Perspective, defines cultural universals as “those general cultural traits found in all societies of the world”. “Chapter 2: The Concept of Cultures” features a table titled “Murdock’s Cultural Universals” which is adapted from George Peter Murdock’s “The Common Denominator of Cultures” in The Science of Man in the World Crisis (Linton 1945). Murdock, the intellectual founder of HRAF, identified a cross-cultural list of human universals, which include language and marriage. While it is generally agreed upon that these practices are universal among all societies, other practices such as cannibalism and incest, are not. It is the “grey area” topics such as romantic kissing which provide ideal material for further exploration through cross-cultural research. Student teams from both sections of ANTH 1000 made presentations on the topic of romantic kissing.

Slides from each team’s presentation are featured here: 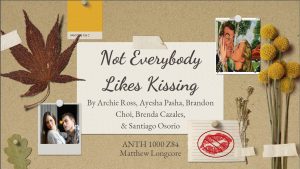 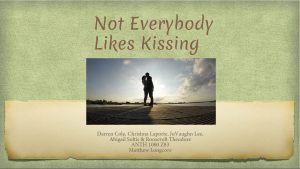 Brandon Choi, a first-year student at UConn with a major in Human Rights, exceeded expectations by taking the initiative to contact Professor William Jankowiak at the University of Nevada Las Vegas. Jankowiak is an internationally recognized authority on urban Chinese society, urban Mongols, and Mormon fundamentalist polygyny. His research has been features in numerous media outlets, including The New York Times, Time magazine, and the History Channel. Jankowiak kindly agreed to an interview, which added depth and breadth to the ANTH 1000 student team presentation.

Listen to the interview here:

If you are interested in the eHRAF databases and your college or university is not a current member, you are welcome to request a free 60-day institution-wide trial.

If you are an instructor who incorporates eHRAF World Cultures in your teaching, or a social scientist teaching about cultural universals, HRAF would like to hear from you. Please contact us at hraf@yale.edu.

Murdock, G.P., 1945. “The Common Denominator of Cultures” in The Science of Man in the World Crisis, edited by Ralph Linton. New York, Columbia University Press, pp.123-143.