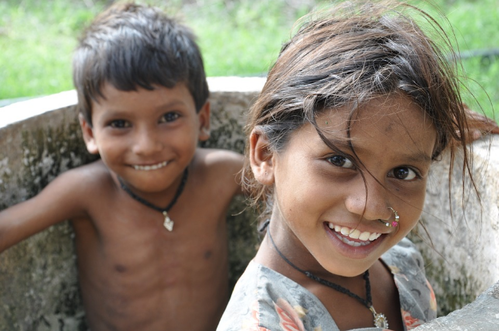 Compared to other animals, humans take a very long time to become fully capable adults. Some North American parents, if asked today how long it takes a child to grow up, might jokingly (or maybe not so jokingly), give an answer of 25-30 years. But the length of childhood varies considerably across cultures and even within cultures the effective period of childhood can shorten or lengthen by social group or over historical time periods. So in present-day North America, post-secondary education is often perceived as a prerequisite for later success in life, whereas in earlier time periods, this amount of education was far less important and children could manage on their own at earlier ages.

As a species, humans have a very different life history trajectory compared with other mammals and with other primates. First, human babies are born relatively helpless and remain so for a longer time period. Second, the length of time to sexual maturity is quite long. Finally, whereas in many animals death occurs not too long after the ability to reproduce ceases, human females live considerably longer than their age of menopause. Understanding these developments is complex (see Konner 2010 for a lengthy discussion), but there is broad consensus that selection for larger brains over the course of human evolution was of paramount importance for producing these life history features. For it is in this long childhood that children have the luxury of being able to explore, experiment, play, observe, and “soak up” knowledge. Hawcroft and Dennell (2000; citing Pinker 2003) remark that children are like “mental sponges,” seemingly craving understanding. Consider that without formal training children are fantastic at learning complex language and the world over do so with seeming ease around two years of age. Yet later in life adults have much more trouble learning a new language.

All human societies work with this basic developmental template. The bottom line is that it is rarely possible for a human mother to successfully rear a child without any help from others. But the details and dynamics of child rearing is strongly influenced by cultural ideas and practices. Some of the important dimensions of variation are: How much does the mother do for the child directly? To what degree does the father help? How much do nonparents help? Where does the infant/child sleep? How long is a child breastfed? How much attention and affection is shown to children? How much freedom is given to children to play, explore, or create, or are they expected to do considerable work and undergo formal training? How differentiated are the lives of female and male children? What techniques do parents use to rear their children? What are the important values that parents try to instill?

While there is a massive body of research featuring children in industrialized Western nations and a number of child-focused studies in individual small-scale societies, our discussion here is generally restricted to worldwide cross-cultural studies featuring 10 or more cultures; unless otherwise noted, most of this research has been conducted on samples of nonindustrial societies. And for this module we concentrate largely from birth up to adolescence. We are concerned with the broad questions: How and why does childhood vary across cultures? What are the consequences of variation in childrearing? eHRAF World Cultures is full of ethnographic examples.

As we mentioned above, it is rare that a mother alone, without help from family, friends, or paid workers, can successfully rear a child. To be sure, in the world today there are many single-parent households, so it is obvious that while help from others is essential, two parent families are not. However, for most of human history, marriage between a woman and a man was the norm and fathers contributed to some degree with resources or direct child care.

In the nonindustrial world breastfeeding was absolutely essential for the survival of a baby. It was only relatively recently in human history that alternatives to mother’s milk (e.g., cow’s milk, manufactured infant formulas) became widely substituted. High income countries today are the least likely to exclusively breastfeed infants and even in middle and low income countries only 37 percent of children are exclusively breastfed for 6 months. And yet, accumulating medical evidence suggests that breastfeeding provides significant advantages to infants. For infants breastfeeding provides substantial increases in survival rates, fewer episodes of diarrhea and respiratory infections, and fewer admissions to hospitals (Victora et al. 2016). Given the adaptive importance of breastfeeding and the necessity for the infant to be near the mother when breastfeeding, it is not surprising that mothers are the main caretakers of infants.

However, cross-cultural research has also revealed substantial variation in mothering around the world in the degree of contact and the kind of contact:

We tend to think of “mothering” as automatically warm and affectionate, but in fact the degree of warmth expressed by mothers towards children varies with social circumstances.

Until recently, breastfeeding was a universal feature of infancy/early childhood. Allomaternal nursing (at least some breastfeeding by women other than the birth mother), while relatively rare in contemporary industrialized nations, has been frequently observed cross-culturally.

Co-sleeping is the practice of children sleeping close to their mothers and/or both parents. While the term generally refers specifically to infant co-sleeping, older children and adolescents also have been observed sleeping with or near their parents across cultures (Hewlett and Roulette 2014). Though research is scant, cross-cultural studies have found:

Paternal relationships vary considerably across cultures in degree of closeness and involvement in child-rearing. Here a distinction is made between direct child-care (e.g., carrying, feeding, and grooming) and more general father-involvement, which includes indirect care such as paternal contribution to household resources. Cross-cultural studies indicate that:

An alloparent is any individual, other than a parent, who helps take care of a child. After infancy, individuals other than mothers or fathers make large contributions to child care:

While there is a dearth of worldwide cross-cultural studies on grandparent-grandchild relations, previous findings indicate that grandparents may occupy a unique and important role in children’s lives. The long post-reproductive lives of human females constitutes a major area of inquiry for evolutionary scholars, with one body of theory asserting that increased human longevity relative to other primates evolved as a means of continuing investment in existing offspring. This premise is often referred to as the “grandmother hypothesis” (Peccei 2000).

Siblings are also important caretakers in many societies.

Only in contemporary developed countries has infant and child mortality been 1% or lower (Human Mortaility Database 2008; cited in Volk and Atkinson 2008)—a triumph of public health advances such as sanitation (Stearns 2006; cited in Volk and Atkinson 2008). Throughout human history, though, many (or even most) children died before reaching adulthood:

Many social scientists have concerned themselves with the onset of gender differences, i.e., when and how children acquire the gender roles prescribed by their societies. Cross-cultural studies of child socialization, child’s work, and gender differences have revealed:

Variation in corporal punishment has been a focal issue for many cross-cultural researchers and developmental psychologists who assert that violent punishment during childhood begets violent or antisocial behavior later in life (see Consequences of Variation below).

While children typically make little or no direct economic contributions to their households in developed industrial nations, cross-cultural research suggests that this pattern is not typical for nonindustrial cultures, where children often make significant labor contributions.

“Play is the work of childhood”

Children play in all known societies, and many authors argue that play behavior constitutes an important form of learning and development (C. R. Ember and Cunnar 2015; Konner 2010).

Games and sport appear to be human universals, and cross-cultural research indicates that variations in games are related to variation in child-training (see the EHC Games and Sports module for more).

Preceding sections considered both universal patterns and cross-cultural variation in childhood. Here we address the impact of child-rearing practices beyond childhood.

What We Do Not Know

Explore some texts and do some comparisons using the eHRAF World Cultures database. These exercises can be done individually or as part of classroom assignments. See the Teaching eHRAF Exercise on Childhood for suggestions.

The summary should be cited as:

Alloparenting Individuals other than parents acting in a parental role

Rohner, Ronald P. 1975. “They Love Me, They Love Me Not: A Worldwide Study of the Effects of Parental Acceptance and Rejection.” New Haven, Ct: HRAF Press.