Climate scientists predict not only accelerated global warming but also greater impacts of extreme events such as  droughts and floods.  Such extreme events or hazards are likely to create serious social consequences, including famine, displacement, and increased violence. While climate events are becoming more extreme, natural hazards and resulting disasters are not new, and it is important to try to understand how human societies with varying livelihoods and vulnerabilities have responded to and invented solutions to such conditions both in the past and the present. The assumption is that most societies that have survived for long time periods of time have arrived at some resilient solutions, particularly when hazards were recurrent.

To maximize the generalizability of results, this 4-year NSF-supported interdisciplinary research grant to the Human Relations Area Files is comparing societies/populations normally studied by different disciplines and testing theories derived from each of the disciplines across varied geographic and temporal domains. To maximize the range of both environmental and cultural diversity, the worldwide samples compared and contrasted will vary in the frequency, severity, and predictability of hazards they experience related to food production, storage and availability.

The broadest research questions are: How often do events have to occur for humans to plan for them? Do unpredictable hazards lead to different cultural transformations than do more predictable hazards? Under what conditions are contingency plans overwhelmed in the face of natural hazards that are more severe or more frequent than normal?

Answers to these questions will give insights into people’s future engagement with climate change. Hypotheses and models are being tested across three different domains and data-sets: 1) a worldwide sample of over 100 largely preindustrial (“traditional”) societies described by ethnographers; 2) a worldwide sample of prehistoric traditions described by archaeologists; 3) and a worldwide sample of 33 contemporary countries with data collected through individual interviews. To compliment data on natural hazards from historical and contemporary observations, a climatologist is analyzing rainfall and temperature data to arrive at independent measures of environmental predictability and variability, plus collecting paleoclimate data for the archaeological dataset.

Controlling for type of economy and political system, predictable patterns of resilient behaviors in time and space are expected—such as contingency plans, subsistence diversification, and sociocultural transformations that expand and solidify cooperation and networks. These patterns should prove instructive for preparing for extreme events and reducing their impacts.

See NSF for the official announcement and abstract. For preliminary results see a recent presentation at the Human Behavior and Evolution Society meeting in Vancouver, Canada. 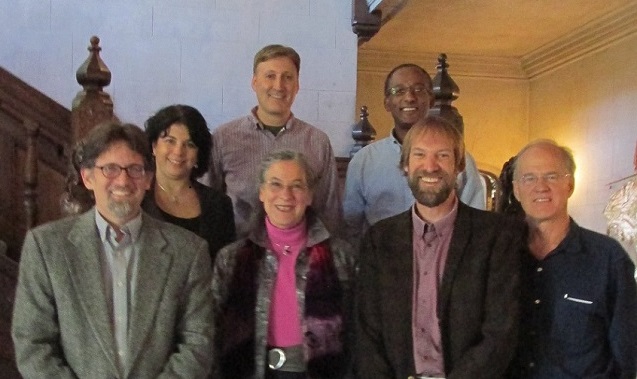 Members of the research team had their launch meeting at the HRAF headquarters in New Haven in October. Front row from left: Peter Peregrine, Carol Ember, Eric Jones and Ian Skoggard.  Back row from left: Michele Gelfand, Ben Felzer, and Teferi Abate Adem.