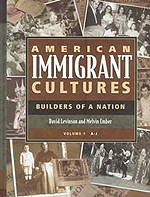 American Immigrant Cultures: Builders of a Nation is a two-volume reference work published by Macmillan Reference covering nonindigenous cultural groups currently living in the United States. It discusses both European groups that have been components of American culture for centuries, and those groups who have arrived recently and are therefore less assimilated and more culturally distinct.

A compendium, from A to Z
From the Acadians to the Zoroastrians, each of these alphabetically arranged articles answers several key questions essential to understanding American immigrant cultures.

What aspects of their culture do these groups hold dear?
To what extent have they assimilated into mainstream America?
What forms of discrimination and prejudice must they overcome?
What cultural characteristics define these groups?

American Immigrant Cultures discusses the unique cultural attributes of each group, including but not limited to:

The Bibliography of Native North Americans (BNNA) BNNA is the largest and most comprehensive bibliography on Native American history, life and culture, and contains citations to works dating from the 16th century to the present. It contains over 60,000 records direct users to journal articles, essays, monographs, and U.S. government documents. The collection is an essential research tool for anyone exploring native North American topics and issues: anthropologists, political scientists, sociologists, psychologists, educators, legal and medical researchers, etc.See EBSCO. 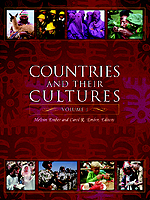 Countries and their Cultures

The countries of the world vary in the degree to which their inhabitants share a common or national culture.  This 4-volume encyclopedia provides comparable cultural surveys of more than 200 countries around the world.  Illustrated with 1000 photos and 225 maps.  Available in print and online. 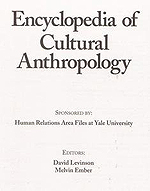 The Encyclopedia of Cultural Anthropology is an authoritative reference in the field, with contributions by many of the most respected anthropologists in the world. It helps students, academics, and professionals uncover the practical information they need, surveying the major methods, perspectives, ideas, and knowledge produced by cultural anthropology. The Encyclopedia was prepared under the direction of a distinguished editorial advisory board of 24 eminent scholars representing a wide diversity of specialties and perspectives in the discipline. Key features of the Encyclopedia include: 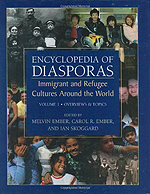 The movement of people around the world, sometimes voluntary, but often involuntary, has occurred throughout history. But the pace of global movement has accelerated in recent times.

This two volume encyclopedia, with articles by scholars, has three main sections: Diaspora Overviews covers over 20 ethnic groups that have experienced voluntary or forced immigration. Topics discusses the impact and assimilation that the immigrant cultures experience in their adopted cultures. Diaspora Communities include over 60 portraits of specific diaspora communities. The cultural portraits are written with standardized headings to facilitate comparison. Springer. 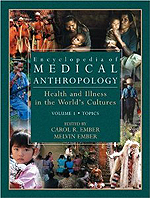 This two volume encyclopedia, with articles by scholars, combines topical overviews and cultural portraits to give the reader a unique perspective on how and why cultures vary in their medical beliefs and practices. The cultural portraits are written with standardized headings to facilitate comparison across cultures. More than 100 experts – anthropologists and other social scientists – have contributed their firsthand experience of medical cultures from around the world.Springer. 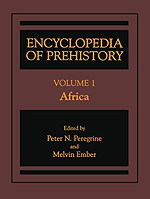 The Encyclopedia of Prehistory is a comprehensive collection of original articles covering two million years of human life. With the help of an advisory board of internationally known archaeologists, more than 250 experts have been chosen to contribute entries on 350 major traditions, 1500 subtraditions and 2000 sites. The 9-volume encyclopedia includes an index volume, organized by region of the world. For ordering information contact Kluwer/Springer. 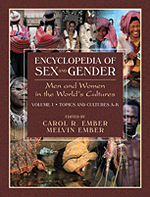 Encyclopedia of Sex and Gender

This two volume encyclopedia, with articles by scholars, combines topical overviews and cultural portraits to give the reader a unique perspective on how and why conceptions of gender, gender differences, gender roles, relationships between the genders, and sexuality vary across the world’s cultures. The cultural portraits are written with standardized headings to facilitate comparison across cultures. More than 100 experts – anthropologists and other social scientists – have contributed their firsthand experience of medical cultures from around the world. Springer. 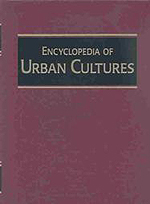 The Encyclopedia of Urban Cultures contains original articles that summarize the cultural features of the most important cities around the world. Experts on each city have been chosen with the help of a distinguished board of advisors. Grolier/Scholastic published the Encyclopedia as a 4-volume set in the fall of 2002.

Online as well as in 10 print volumes, the award-winning Encyclopedia of World Cultures describes more than 1500 cultural groups across the globe. Most of the entries are written by anthropologists and other social scientists who worked first-hand in the societies they describe, so the encyclopedia contains authoritative summaries on most of the cultures existing in the 20th century. Information is included on the major aspects of social life and customary practices. Used widely in research libraries as well as high schools and public libraries. Available through Macmillan/Gale.