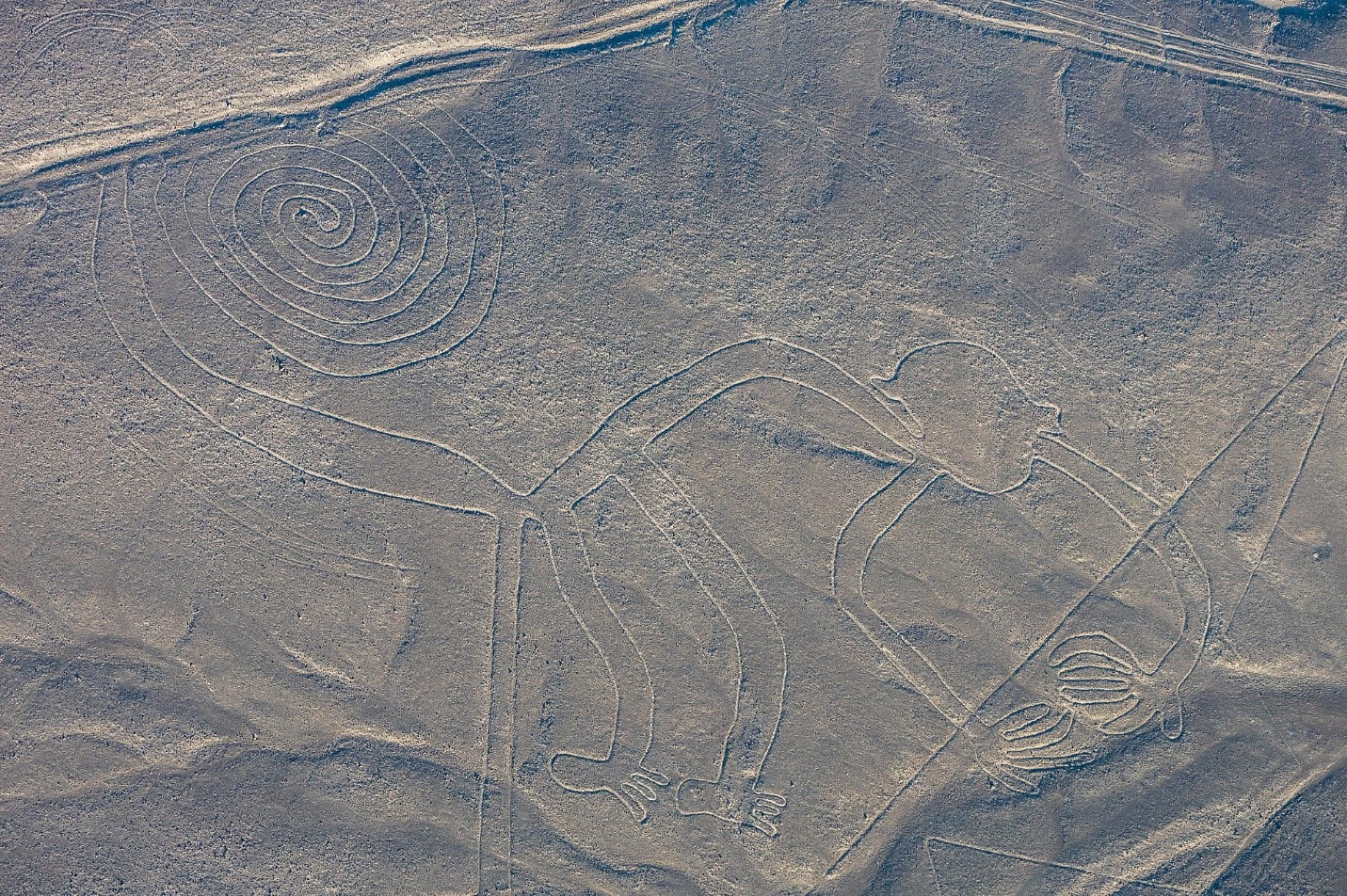 Often considered evidence of humanity’s first artistry, prehistoric rock art has captivated people all over the world. Associated with many different cultures, the meaning and purpose of most forms of prehistoric rock art remain shrouded in mystery. Even the most experienced archaeologists continue to ask basic questions about rock art. What does it depict? What does it mean? Who produced it? When was it produced? What function did it serve?

Here, using eHRAF Archaeology and other sources, I will explore some examples of prehistoric rock art while demonstrating how scholars have attempted to understand the ancient people that produced these mysterious markers of human artistry and creativity.

Most simply put, rock art is artwork done on natural rock surfaces. This means it can be found on the sides or walls of caves, cliffs, sheer standing rocks, and also boulders. Most of the rock art that I encountered while doing an archaeological survey in Southern California was located on the sides of massive granite boulders (for example, see Figure 2). Rock art may also be referred to as “rock carvings,” “rock engravings,” “rock drawings,” and “rock paintings.” There are three categories of rock art that have been studied and defined by archaeologists since a systematic study of rock art began. These include petroglyphs (carved rock art), pictographs (painted rock art), and earth figures (large surface scrapings).

The first of these categories is petroglyphs. This category contains all rock art that is considered to be rock engravings or carvings. For this type, a rock’s surface is carved or removed in specific patterns using a hammerstone. This tool is used to peck or hammer artistic details into the surface of a boulder, cave wall, or another natural stone surface. Alternatively, rather than using a hammerstone directly, a hammerstone can be used in tandem with a smaller chisel stone to produce finer details (Whitley 2005). The Hemet Maze Stone pictured below was most likely carved using the latter of these two methods. 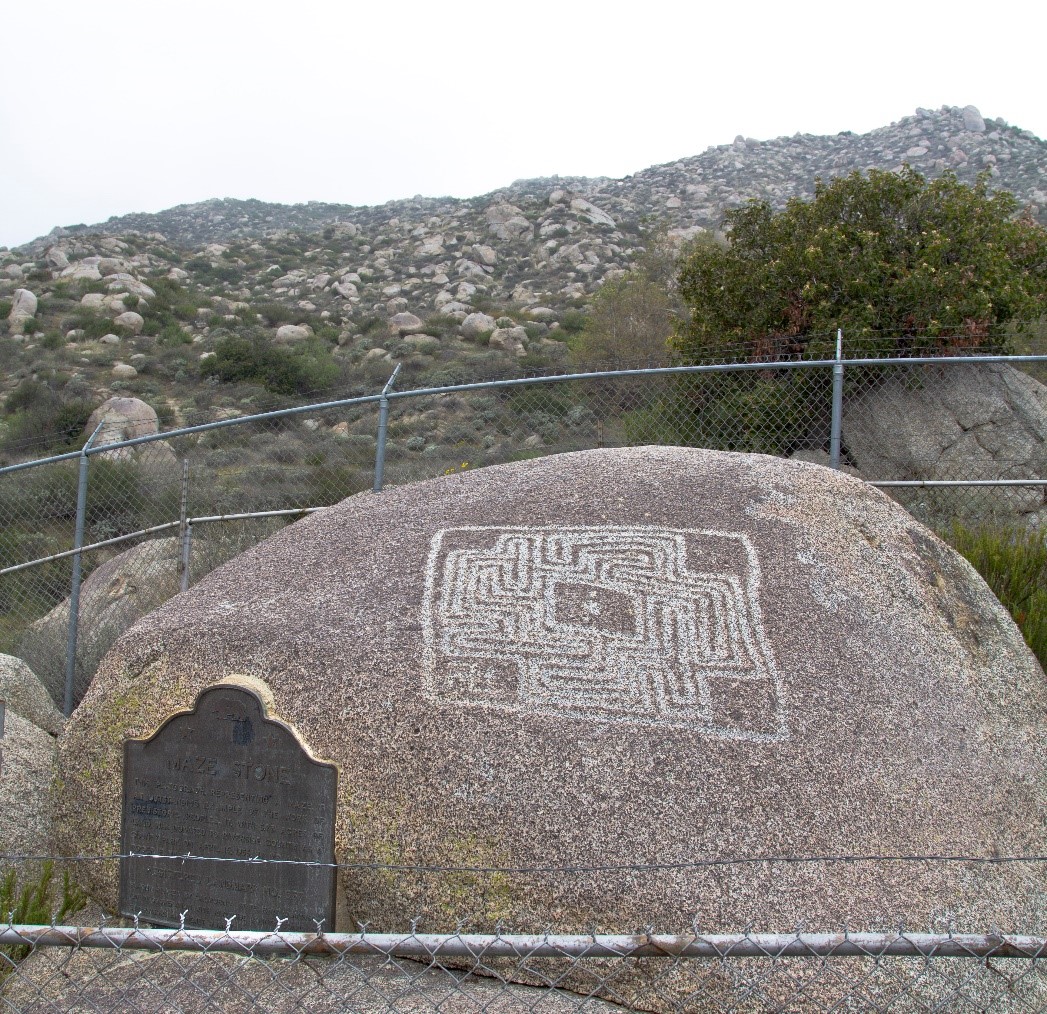 A commonly found, less complex form of petroglyph is a cupule. A cupule is a simple carving that looks like a cup-shaped hole in the side of a rock surface. Dating to the stone age or earlier, cupules are found all over the world. Many consider them to be the oldest form of rock art. Although they look simple, it is thought that cupules can express ritual or symbolic meaning. In the area near where the Maze stone was found, during several archaeological surveys, my team and I discovered many cupules on large boulders in the area. At one site, a large granite boulder was covered in hundreds of cupules. Given the amount of time carving granite takes, one can easily see how the cupules represent hours and hours of dedication. Why would the native people in this region spend so much time carving cupules all on one boulder?

Although the precise meaning cannot be determined, it has been theorized that they were carved during coming-of-age ceremonies (Hedges 1976:17). Over time, ritual practitioners would have noted that these cupules accumulated. Eventually an accumulation of cupules could come to represent a history of ritual action–a local record of ritual events over time.

Another, rarer form of petroglyph is created through incision or scratching rather than carving or chiseling, with tools like lithic obsidian blades. Given that obsidian blades have fine edges, smaller fine-grained details can be made upon rock surfaces using this method. That said, because such carvings are not very deep and rock surfaces erode over time, this form is often difficult for archaeologists to identify (Whitley 2005). 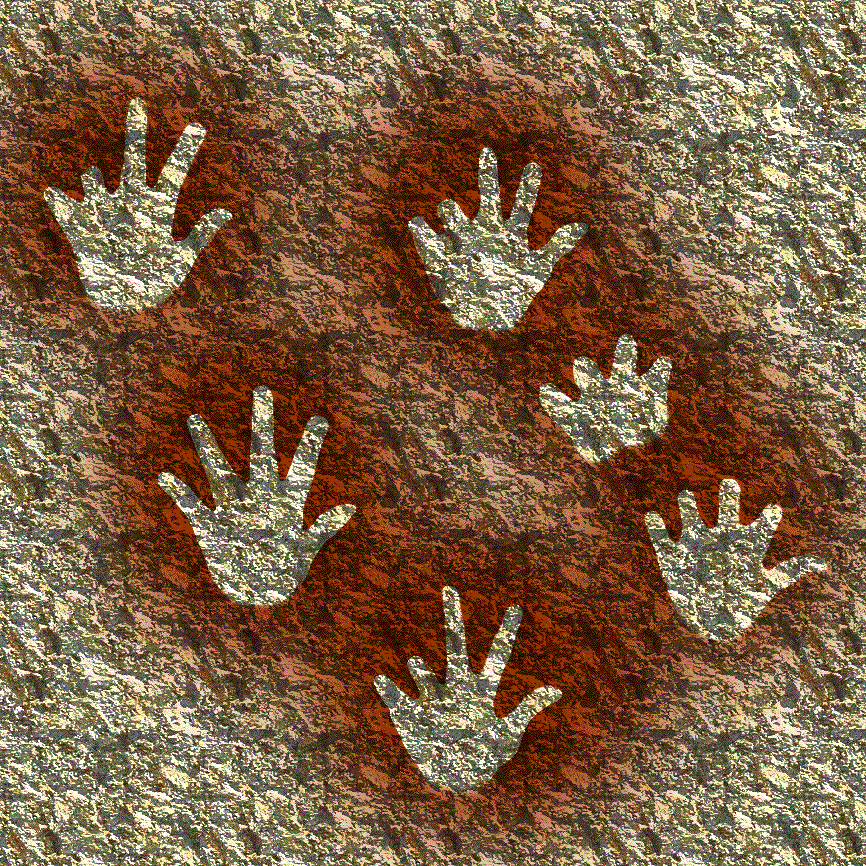 Pictographs, painted artwork on stone surfaces, are often regarded as the most beautiful rock art. Like the other forms of rock art, pictographs are found worldwide and date deep into the human past. The pigments used to make pictograph paints are ochres, charcoal, ground minerals, natural chalk, kaolinite clays, and even diatomaceous earth. Usually, these substances are mixed with liquids like water, eggs, and blood to make red, black, and white paints. Brushes, stamps, hands and fingers were used to apply these paints to rock surfaces (Whitley 2005). One of the most famous and well-known types of pictographs is the “handprint” type that is found at the Gargas caves in southern France. These paintings date to about 25,000 BCE. At the Gargas caves, the pictographs are negative prints that were created using the human hand as a stencil. A person would put their hand against the rock wall and spit or blow pigment through a bone tube creating a negative image or outline of the hand (Whitley 2005). 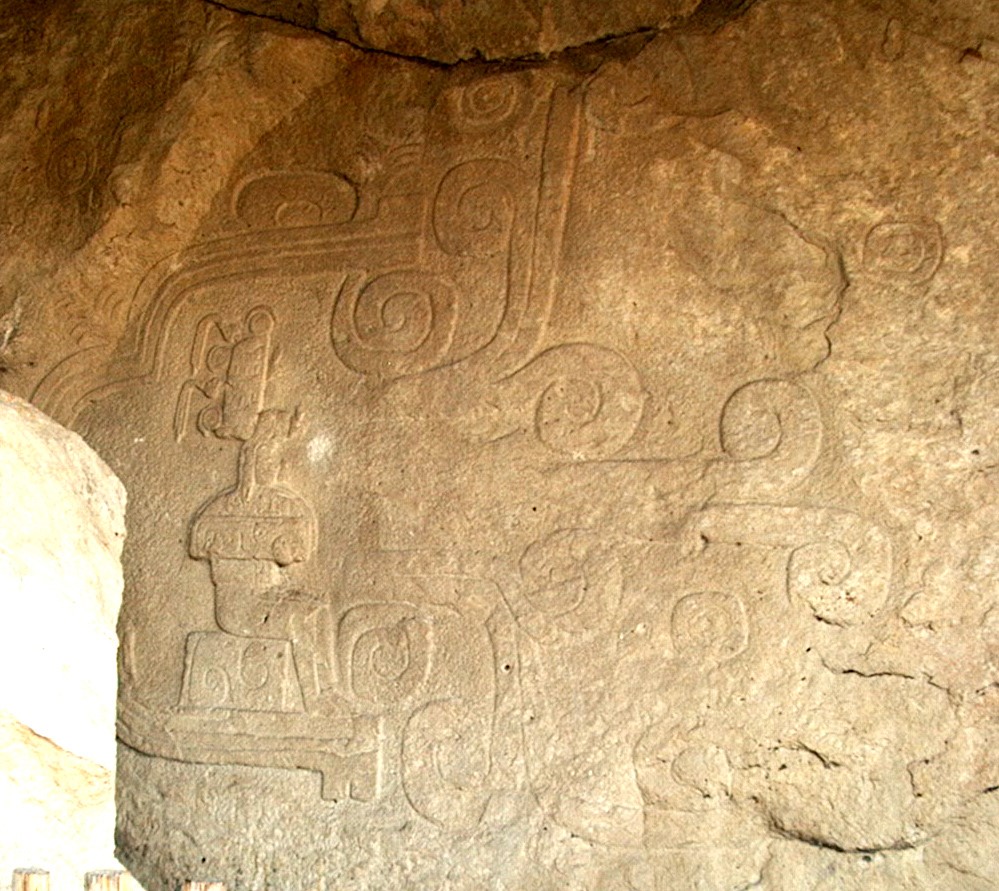 Pictographs and petroglyphs can be found together in close proximity. This is the case at the Mesoamerican site of Chalcatzingo. This site is well known for its petroglyphs that are often described as low-reliefs, yet it also has a number of pictographs at the site and nearby. The low-reliefs have been interpreted to be representations of cosmological ideas. More specifically, they represent cycles of nature, fertility, celestial beings, and beliefs about sacred relationships found in nature (Angulo 1987:155). Studied by Alex Apostolides (1987), the pictographs are simpler but harder to correlate with other site activities. The pictographs include “stick figures,” a “triangle and slit” design, a “sunburst,” “plumes,” and spirals. These design elements are combined and found at many places around the site. This includes caves, niches, and rock walls. Apostolides (1987) attempted to characterize patterns in the pictographs grouping them by location, color, and symbols but reached no major conclusions regarding the meaning or function of the artwork. This is because the pictographs were impossible to affirmatively date and often ambiguous in terms of their general form. More recently Julio Amador (2018) has argued that some of these pictographs represent water and or serpent imagery.

“Earth figure” rock art is created by scraping large pictures or symbols into the surface of the earth. The Nazca lines are probably the most famous of this third category of rock art (see Figure 1). Scraped from the Peruvian desert floor, these massive forms of art have inspired many studies, theories, interpretations, and conspiracies because of their size and because they appear to be made to view from the sky. Today, most scholars agree that the lines were created by systematically removing dark desert top floor minerals which exposed the light soils beneath. Detailing how they look from the sky, astronomer Anthony Aveni (1990) wrote, “from an airplane, the markings appear as a tangled mass overlapping and intersecting one another, rather like the remains of an unerased blackboard at the end of a busy day of classroom activities.” Although many theories pointed to astronomical uses of the Nazca lines, Aveni (1990) found no evidence to support astronomical uses. Aveni speculated that rather than use the lines for astronomy, the Nazca may have used the lines as special ritual paths: “Perhaps one ought to sense the monkey or the hummingbird [shape] not by seeing it from the air, but rather by walking (or running) upon it. Thus one would perceive with the body every sinuous turn in the labyrinthine tail or the delicate curvature of each individual fragment of avian plumage.” Yet, in the early 2000s scholars found another clue as to the use of the lines. David Johnson and colleagues found that the lines may follow important water aquifers in the parched desert (Johnson et al. 2002). Most recently, Italian scholars have argued the lines serve special ritual functions related to calendric events at the nearby temples of Cahuachi (Masini et al. 2016).

There is still no real consensus to the use or meaning of Nazca lines. In many cases around the world, the meaning and function of famous examples of rock art continue to be debated and explored with no end in sight. Using eHRAF Archaeology, scholars can study rock art cross-culturally to find potential answers. Patterns in rock art could be defined and used to solve the mysteries of this most ancient form of human creativity.