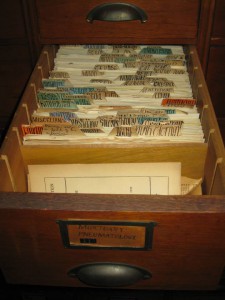 Development of the HRAF Collections began with the belief that valid generalizations about human behavior, society and culture will only come from studying humans in all their variety, not just humans closest to home. In 1935 at the interdisciplinary Institute of Human Relations, Yale University, under the direction of the Institute’s Director, Mark A. May, and Professor George Peter Murdock, a small group of researchers began to design a system that would allow the rapid retrieval of information on a broad range of societies. The effort that began at the Institute was called the Cross-Cultural Survey. It then became the HRAF Collection of Ethnography (often called for short the “HRAF Files”). Although it does not yet contain all the materials in the whole collection, eHRAF World Cultures is the online version.

The Cross-Cultural Survey was based on a number of principles, the most important of which were: 1) develop a subject-indexing system that would help researchers find materials within documents; 2) collect information on the cultures of the world; 3) use human intelligence to index cultural, behavioral, and background information on a society down to the page and paragraph level; and 4) organize the materials by region, culture, and subject in one location.

The first step was to develop a subject classification system, the Outline of Cultural Materials (OCM) and an Outline of World Cultures (OWC). Each has undergone many revisions. The OWC was intended to be a reasonably complete list of the world’s cultures, but it was never intended that all cultures would be included in the HRAF Collection of Ethnography. Rather the aim was for 400 societies around the world to give sufficient diversity.

In 1946, under the direction of Clellan S. Ford, the idea emerged to form a cooperative inter-university consortium to make the Cross-Cultural Survey more widely available. In 1949, the Human Relations Area Files was incorporated in the State of Connecticut, with Harvard University, the University of Oklahoma, the University of Pennsylvania, the University of Washington, and Yale University as its founding member institutions. These five were joined within the year by the University of Chicago, the University of North Carolina, and the University of Southern California. The initial members played an important role in HRAF’s governance. They sent representatives to the annual meetings and collectively decide on policy. (Click here for a current list of Sponsoring Members.)

Until 1958, the HRAF Collection of Ethnography was produced and distributed as paper files: source materials were manually reproduced on 5″ x 8″ paper slips called File pages, and then indexed by subject OCM category and filed by culture. Wider distribution of the collection was facilitated in 1958 with the development of the HRAF Microfiles Files. (At that time, HRAF added a new class of member–Associate Members. Associate Members do not play a role in governance but their membership dues give them access to the collections and of course help support HRAF’s ongoing work. Click here for a current list of Associate Members.)  Materials from the paper files were processed into microfiche and issued in annual installments to participating institutions; Installment 42 was the last microfiche series issued to members.

In the 1980s, HRAF began developing an electronic publishing program with the intention of distributing the Collection of Ethnography exclusively through electronic means. The Cross-Cultural CDs were the first result of this effort, providing researchers with ten collections on such topics as old age, marriage, religion, and human sexuality, excerpted from HRAF’s Sixty Culture Probability Sample Files (PSF). In 1993, the first installment of the full-text HRAF Collection of Ethnography on CD-ROM (eHRAF) was issued to members. The last CD-ROM was issued in 2001 (the CDs are no longer available). An online version was available in 1997 (eHRAF Collection of Ethnography) and was hosted by the Digital Library Production Service at the University of Michigan. On February 1, 2008, HRAF began hosting its own application retitled eHRAF World Cultures. In the later part of the 1990s, HRAF began developing a collection of archaeological materials largely modeled on the ethnographic collection. The first archaeological materials went online in 1999 as eHRAF Collection of Archaeology. It is now called the eHRAF Archaeology database.

Today, almost 400 colleges, universities, libraries, museums, and research institutions in the United States and 25 other countries have full or partial access to the Collection of Ethnography. (Click here for a comprehensive list of members with eHRAF World Cultures or with eHRAF Archaeology.)

For over 60 years, HRAF has served the educational community and contributed to an understanding of world cultures by assembling, indexing, and providing access to primary research materials relevant to the social sciences, and by stimulating and facilitating training and research in these fields.