“Imperial Romans” is one of many culture files featured in the eHRAF World Cultures database. In the Collection Description and Culture Summary sections of the Browse Culture menu, they are briefly described as follows:

The Imperial Romans period ranges over a time span of nearly 500 years, from 27 BC to 476 AD, with a primary focus on the city of Rome, and secondarily on the Roman Empire at the height of the Imperial period (first to second centuries AD). By the middle of the second century AD the Roman Empire had conquered most of the then known world – North Africa (Morocco, Egypt), Gaul, Spain, parts of Germany, Britain, Central Europe, and parts of western Asia. Government in the Empire was centered in the city of Rome under the emperor, his advisers and personal staff in the administration. At its height the Roman Empire consisted of approximately 40 provinces and an aggregate of cities and towns enjoying varying degrees of self government according to the status granted to each by the central government.

In the eHRAF World Cultures database, the ethnographic texts collected for the “file” about the Imperial Roman period are also indexed with subjects at the paragraph and page level.  If the ethnographic texts are about apprenticeships, they may be indexed with HRAF-specific subjects such as Vocational Education (OCM 874) and Transmission of Knowledge (OCM 868). Vocational Education includes the following description:

Below is an image of a document results page for the searched topic: “apprenticeships in the Imperial Roman time period.” On the left is a list of searched documents, in the middle snippets of paragraphs with searched keywords, and on the right the OCM subjects which are based on the Outline of Cultural Materials. 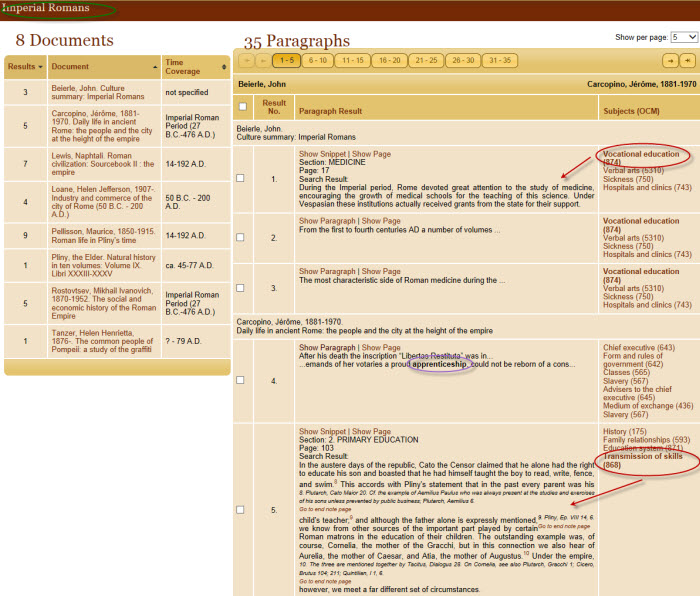 Text results for an Advanced Search for “apprenticeships for Imperial Romans” using the HRAF Culture name, OCM subjects, and keywords.

In the online eHRAF databases, the OCM subjects can be found in Browse Subjects, used as “Add Subjects” in an eHRAF Advanced Search, or automatically mapped in a Basic Search.

Here is an example of how an Advanced Search might look like for finding information on apprenticeships in the ethnographic documents of the Imperial Romans. 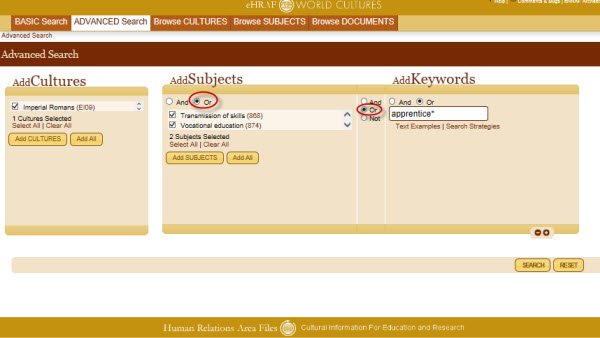 Perhaps you would like to use a HRAF specific subject to search the eHRAF ethnographic and archaeological online databases?  At “Topics Covered” on HRAF’s home page you can find a list of all the OCM subjects on cultural and social life.

Contact us for a temporary login to HRAF’s unique databases or access eHRAF through your library portal.