“Youth must go, ah yes. But youth is only being in a way like it might be an animal…But it itties in a straight line and bangs straight into things bang bang and it cannot help what it is doing. Being young is like being like one of these malenky machines.” (Burgees 1985, 202). 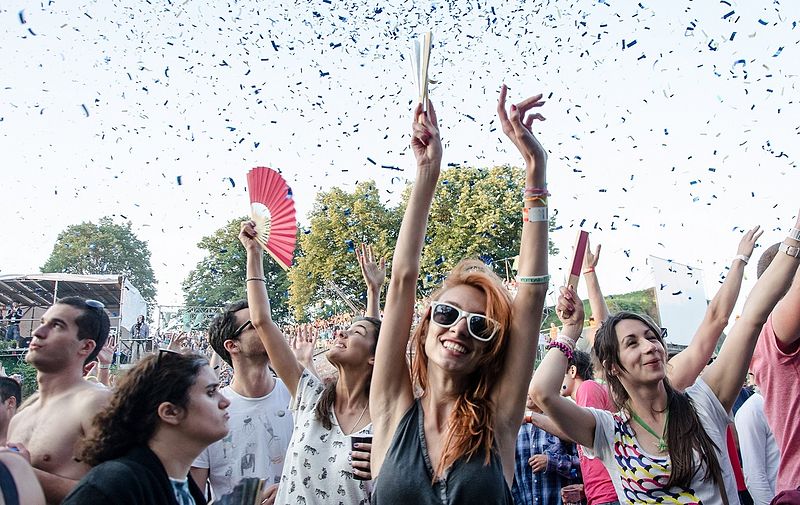 Crowd of teenagers at music festival. Photo by Bernard Bodo 2013. CC by 3.0 via Wikimedia

In Western societies like the United States and those of Western Europe, the period of adolescence is often regarded as one of the most dramatic and difficult stages for parents and children’s to undergo—-with teenagers exhibiting problematic and antisocial behavior as parents attempt to control it. Yet even though adolescent misbehavior is regarded as problematic in many of these societies, it is also considered equally as natural, or an innate quality of human development.

Do other societies have the same conception of adolescence as a deeply troubled time? The short answer is, no. Although it is true that almost all societies around the world recognize the period of adolescence (Schlegel and Barry 1991, 33), youth attitudes and behaviors are shaped by many different practices, ideologies and behaviors around the world and the stage of adolescence varies considerably. In most societies, adolescence actually appears to be very short in length and frequently it ends in marriage (Schlegel and Barry 1991; for more detail on cross-cultural research on adolescence see Ember, Pitek, and Ringen 2017).

However, the idea that adolescence is a time of “trouble-making” is not just confined to Western societies. Robert LeVine (1980, 85) describes how young male adolescents called “abamura” in Gusii society (Kenya) are considered to be troublemakers. In Gusii society, however, this period of moral and behavioral immaturity can last well past marriage, ending only when the young men become elders themselves:

“From the viewpoint of the elders, the abamura (plural) collectively are potential troublemakers and not entirely mature in their moral judgment. Their high-spirited aggressiveness is associated with their precolonial function as warriors eager for a chance to use their spears on behalf of the community. On the other hand, the elders recognized that this aggressiveness could result in domestic disruptions, which increased after the colonial abolition of the cattle villages brought the abamura home. A number of the sayings about them and rules restricting them suggest that the greatest fear was that they might attack their elders, their fathers actual and classificatory. For example, they were (at least until the 1950s) prohibited from drinking beer with their elders; if there was a large beer party, they would have to drink in a different house. Elders justified this explicitly by reference to the bellicosity of the youth when drunk. They were also prohibited from growing beards; if an omomura let his beard grow, his father might say, ‘Do you want to kill me?’ (that is, are you pretending to be an old man, which presupposes that I am dead?). The elders expected that abamura were not capable of controlling themselves and needed to be checked by their seniors. This expectation operated to excuse misbehavior by the young men, so long as they were not openly disrespectful of patriarchal authority. Even a man in his thirties who committed a crime or mistreated his wife might be excused after reprimand on the grounds that he was omomura. Only the elders were presumed to be fully responsible in a moral sense.”

Although Westerners may expect from adolescents a certain level of delinquency, antisocial behavior and sometimes violence, cross-cultural research demonstrates adolescent behavior and experience is actually quite variable across the world. Adolescent misbehavior does not appear to be a cultural universal. Indeed, it is relatively uncommon in non-industrial societies (Schlegel and Barry 1991, 138, 152). What predicts more trouble-making? Adolescent behavior (and misbehavior) is related to key social relationships and socialization styles. More specifically, cross-cultural research finds adolescents are more likely to misbehave in societies that have more severe punishment, more restrictiveness, and more distant mother-child relationships (summarized in Ember, Pitek, and Ringen 2017).

Young boys in a punk rock band (Nisses Nötter) pose together. Photo by Riotchaos, CC by 3.0 via Wikimedia

One of the strongest patterns regarding antisocial and delinquent behavior of adolescents is related to gender, sex, and sexual prohibitions. In the West, individuals of the male gender are usually expected to get into the most trouble during adolescence. Cross-cultural studies demonstrate male individuals do tend to get into trouble more than female individuals. More specifically, antisocial behavior related to interpersonal violence and theft primarily occurs with males and is not found within female populations (Schlegel and Barry 1991, 39). With this in mind, it appears that a pattern of “boys being boys,” does exist in cultures around the world. That said, conclusions about universal gender roles must always be questioned because because Western and colonial influence has played a massive role in replicating Western gender differences across the world (Connell 2002, 2005).

Another pattern that occurs relates to religious or military oriented groups. Studies show adolescent boys in such organizations exhibit more antisocial behavior than adolescents that engage in more leisure time (Schlegel and Barry 1991, 137). This is contrary to the Western approach to child rearing. In the West, it is often considered that adolescents are more prone to getting in trouble without constructive or direction activities. This shows that common beliefs regarding parenting can actually be wrong. In the case of religious military organizations, research indicates that the social controls of larger social institutions like churches or military organizations may be unfavorably constricting to youth and contribute to antisocial adolescence and delinquency (Schlegel and Barry 1991, 137).

Cross-culturally, adolescent and parent relations can become strained to the point the adolescent even abandons his or her home in order to gain more autonomy. In the West, runaway youths are considered to be one of the most serious problems in society. Yet the phenomena of running away from home is not just a Western problem. Schlegel and Barry (1991) found that such adolescent runaways appear in around half of all societies including nonindustrial societies. Although research on Western runaways demonstrates a link between the behavior and parent-child conflict, Schlegel and Barry (1991, 52) note that this correlation cannot be found in nonindustrial societies. The effects of running away also greatly differ across societies. In describing how the Idaw Tanan (a Shluh group in Morocco) deal with runaways Doyle Hatt (1993, 403) notes:

“As I have mentioned before, ‘running away’ is a common form of tolerated misbehavior on the part of sons, and indications are that it has long been practiced… In the old days, young men, ‘fed up with the stick’, would flee toTassademt or Timzgadiwin, where they would remain for several weeks, gambling, smoking kif, and living in the company of Saharan traders. Today, the direction of flight is toward urban areas, Agadir or Essaouira, and the young men usually search unsuccessfully for work until, having run out of money, or having been robbed by confidence men or pickpockets who prey on ignorant montagnards in the city, they are forced to return home. So common is ‘running away’ that it provokes little commotion when it occurs… Yet, seen through the eyes of the cultural premise we are discussing, these inchoate assertions of independence actually affirm the reverse of their intention: the almost inevitable return of the son, humiliated, exhausted and broke, confirm nothing so much as the immaturity of the rebel, and his very real dependence on his father. The runaway is quietly accepted back into the family fold, and little is ever said of his rebellion.”

In sum, when looking cross-culturally at antisocial behavior among adolescents, we can see variation in the behavior of adolescents and the relationships they have with society itself. As described above, studies indicate that adolescence is a more socially problematic time for males which are more prone to violence, misconduct and delinquency. That said, the ways in which these issues are expressed and dealt with vary greatly society to society. In other words, the issues related to problematic adolescent behavior are related to many factors.

Using tools like eHRAF World Cultures, researchers are just now beginning to explore this variance. Already, cross-cultural studies focusing on the correlations between adolescent autonomy, participation in military and religious groups, and parent child relationships are beginning to show that socially structured regularities play a large role in shaping the period of adolescence in different societies (Schlegel and Barry 1991, Chen et al 1998). With a topic as extensive and important as adolescence, further research will be necessary to fully understand the variability of adolescent behavior and relationships that exist between adolescents, their parents, and society as whole. Understanding this complex web of relations will mean historically exploring social change (as societies change from nonindustrial to industrialized economies, new forms of social organization and living arrangements (neolocality), generational differences, and emergent digital culture that is radically shaping individual identities and social relationships across the world.

Correa-Chávez M. and Rogoff B. 2009. Children’s attention to interactions directed to others: Guatemalan Mayan and European American Patterns. Developmental Psychology 45(3):630-41.