From July 23-27, 2018, a group of scholars specializing in studying people who live, or historically lived, by foraging wild food held their 12th Conference on Hunting and Gathering Societies (CHAGS) in Penang, Malaysia. HRAF anthropologist Teferi Abate Adem attended this conference, ran the HRAF booth, and hosted a workshop on the use of eHRAF in hunter-gatherer (forager) studies. In this note, Teferi shares his observations on academia’s engagement with the world’s remaining hunting and gathering societies as reflected in this conference. 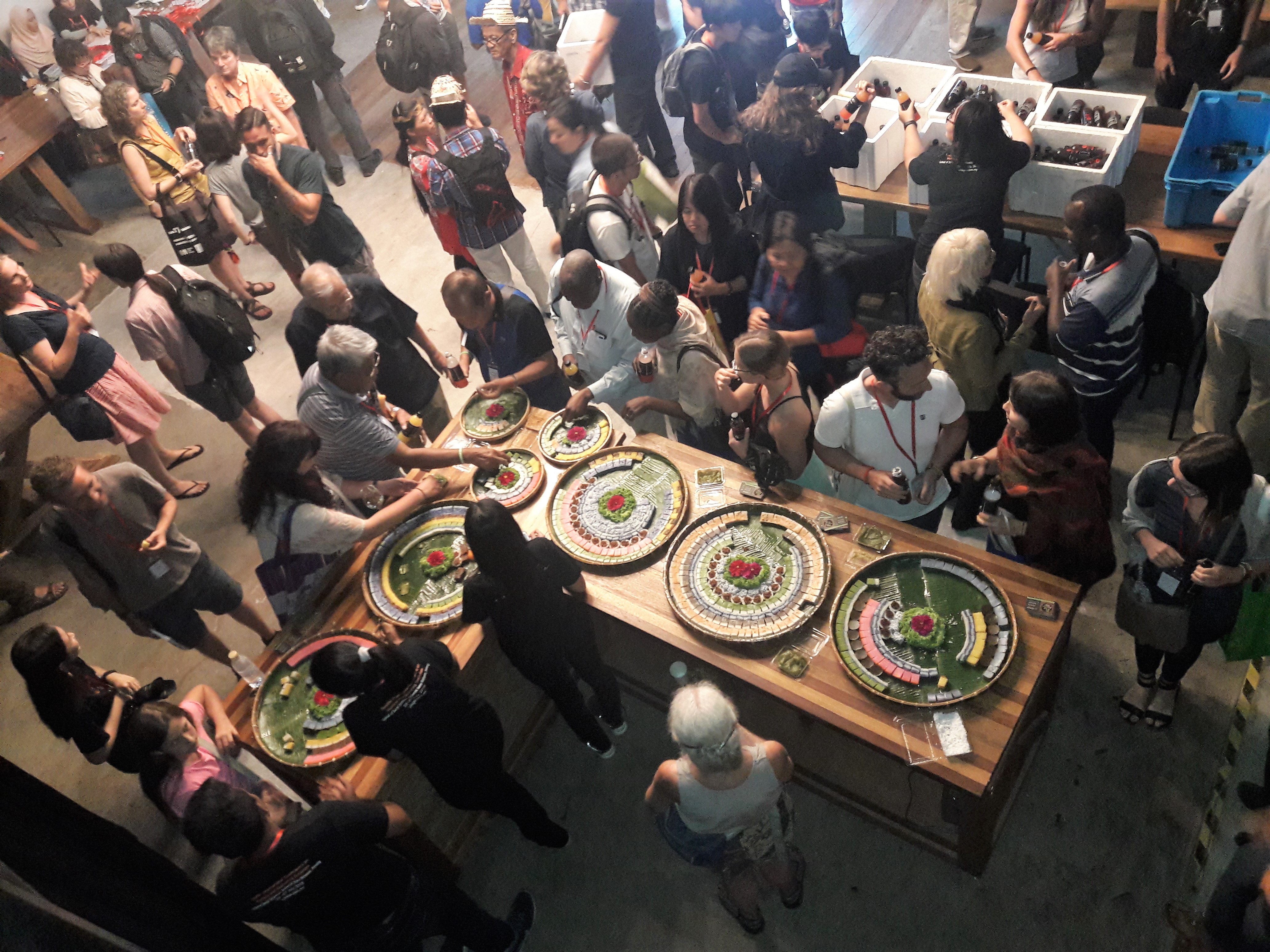 A top-down view of conference attendees gathering for snacks.

Continuous fascination with why some people are still “foraging”

From the opening of the conference to its end, any observer would note that what brought these scholars together is their shared fascination with the question of why some people still rely on foraging (gathering, hunting, and fishing) instead of fully adopting cultivation or animal husbandry. Not surprisingly, however, the dominant explanation no longer traces this continuity as a direct, unilinear, evolutionary descent from an apparently homogenous “early man.” Far from being “living fossils” for understanding the lifestyles of our ancestors as Richard Lee (1966) wrongly assumed, attendees of this conference recognize greater diversity within foraging communities, both historically and contemporaneously. Their approach emphasizes each society’s unique path and recognizes ecological and social factors which may affect their subsistence practices. It was best presented in two keynote speeches I attended.

The first was P. Bion Griffin’s speech titled “Southeast Asian hunters-gatherers: one million years and counting.” While providing evidence for the expansion of Homo erectus into today’s Indonesia and Philippines during the Paleolithic period, Griffin traces the evolution of the region’s current hunting and gathering peoples to the arrival of “modern sapiens…perhaps between 60 and 50 thousand years ago” (p. 27). More importantly, Griffin, far from reducing the indigenous hunting and gathering peoples to a single original lifestyle, recognizes greater heterogeneity – in race, culture, language, and mainstay subsistence –  attributable to variations in the “complexity of the movements” each group underwent and the diversity of Southeast Asia’s tropical and sub-tropical environments.

The second was Peter Schweitzer‘s speech on “The contemporary worlds of northern hunter-gatherers.” In this case, the main driver of diversity among hunting and gathering societies is argued to be the degree of interaction with powerful states and empires living to south of the region (p. 32). More specifically, Schweitzer argues that hunting and gathering societies living in Arctic and sub-arctic areas of Eurasia have interacted with non-hunting and gathering peoples of the region since the beginning from the first millennium AD. By contrast, their contemporaries living in the northern North America had less direct contact with non-hunter-gatherers until the late 19th century. By the 21st century, this variation led to the advent of three groups of hunting and gathering societies that vary in their economic wellbeing and level of integration with the larger society. Namely; 1) those living in the frontier areas of the modern Scandinavian states, 2) the northern North American groups (Alaska and Canada’s northern territories), and 3) the Russian north (p. 33).

Some Debates and Unresolved Tensions

Notwithstanding the commitment to explaining continuity they all share in common, meeting attendees seem to disagree on a range of issues related including the following:

1) What to call their subjects

Despite the apparent clarity of the term “hunter-gatherers” as people who still live by hunting animals and gathering wild food (and fishing!), it is ironic to note that many of the conference attendees doubt whether this definition correctly describes the people they have been studying. Part of the reason for this uncertainty is that many of the societies that previously relied on hunting and gathering now rely on other sources of income including government aid, wage work, petty trading, together with some gardening and animal husbandry. Even in communities where non-hunting and gathering sources do not exist, there is a consensus that people do not survive by simply foraging naturally available food sources. They also promote the availability of food by employing their intimate knowledge of plants and animals (e.g., selective hunting to encourage population growth). This understanding has led some researchers to recognize their subjects not just as hunter-gatherers but also as skilled natural resource managers. 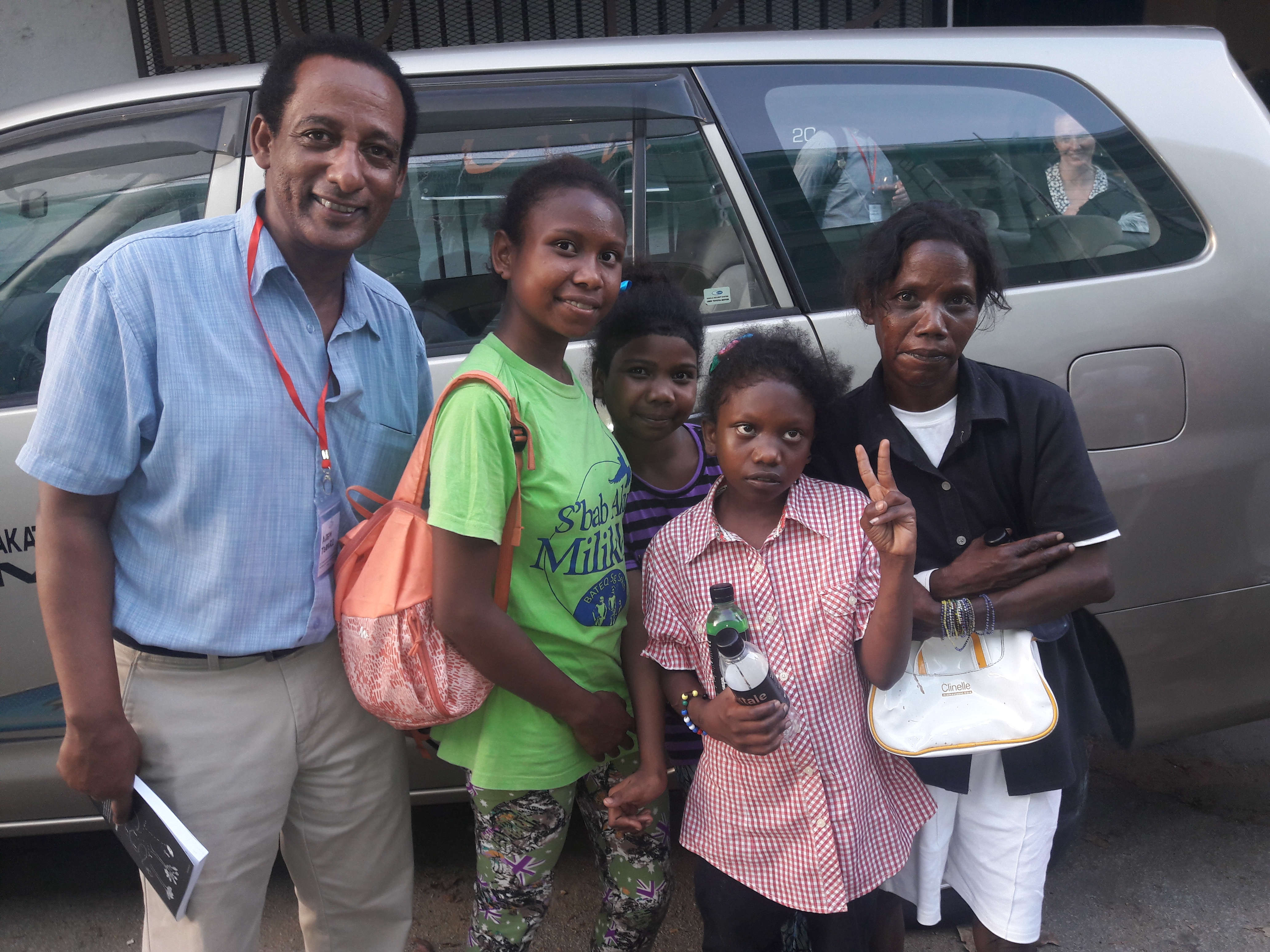 Teferi with Batek community members he met at the conference.

Similarly, many of the presenters seem unclear when asked how they might help the people they have been studying for so long in addressing pressing problems like climate change, land grabbing by stage agents and powerful neighbors, spread of disease and poor access to health services, etc. To be sure, there is a consensus that these problems are increasingly diminishing the wellbeing and livelihoods of many hunter-gatherer communities around the world. However, meeting attendees lacked a similar consensus on what should be done to extricate hunter-gatherers from their historical marginality.

Norwegian anthropologists working among different San communities in southern African seem to envision the solution in helping the affected people themselves better engage with the negative impacts of these external forces. To this effect, Sidsel Saugestad from The Arctic University of Norway, Tromsø reported that she and her colleagues received funds from the Norwegian Foreign Ministry to sponsor selected San men and women community organizers to study in universities in Norway, Botswana and Namibia. I was delighted to meet some of these rising leaders while attending the conference. They each presented papers in which they shared the experiences of their respective communities in resisting land grabbing, demanding access to social services, revitalizing cultural values, operating community-owned businesses, and facilitating cooperation with international donors and marketing agents.

Perhaps because of the achievements and promise of these young men and women, one of the outcomes of this meeting was the establishment of a new research and advocacy group called Hunter Gatherer Education. The aim of this group is to contribute to hunter-gatherer communities’ ongoing efforts to secure sustainable livelihoods, with an emphasis on education– defined to include intergenerational knowledge transmission, formal education, and the interrelations between these two spheres. Attendees of the founding session of this group included native Batek families and school children.

HRAF’s main goal was to help hunter-gatherer experts learn how to find and use relevant information from both eHRAF World Cultures and eHRAF Archaeology. I did this in two ways. One way was setting up a table in the conference exhibition room where attendees could come to browse and pick up informative materials and/or have a one-on-one demonstration of searching the eHRAF databases. I also led an on-site workshop specifically focusing on how to use the full search abilities of the eHRAF databases to conduct cross-cultural research projects. In addition, the workshop introduced our open-access resources relevant to hunter-gatherer research, like Explaining Human Culture (our database of cross-cultural research findings) and our module on cross-cultural trends in hunter-gatherer societies.