eHRAF’s subject categories of ethnozoology (OCM identifier 825), mythology (773), and religious beliefs (770) were used to explore the topic of crow intelligence. With these OCM identifiers, a large variety of human-animal relationships can be explored while potentially enriching studies focusing on human-animal relationships, animal intelligence, animal adaptions, historical ranges of animal species, and much more. 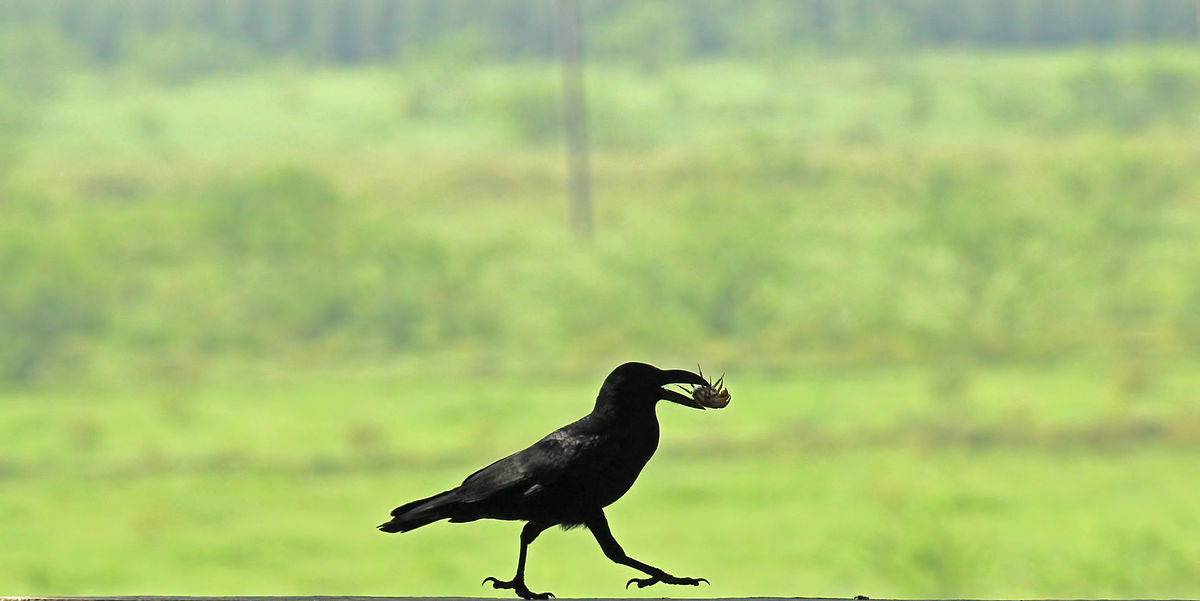 Indian jungle crow with its crab by Karthik Easvur. CC by 3.0 via Wikimedia.

Although they have brains roughly the size of an average human thumb, scientists have been learning that crows and ravens rank amongst the most intelligent of birds. Once disregarded in the world of animal intelligence studies, many crow and raven species are now ranked near primates in terms of cognitive abilities. Wildlife experts John Marzluff and Tony Angell expose crow intelligence in their 2012 book, Gifts of the Crows, writing “Corvids assume characteristics that were once ascribed only to humans, including self-recognition, insight, revenge, tool use, mental time travel, deceit, murder, language, play, calculated risk taking, social learning, and traditions. We are different, but by a degree.” Marzluff also led research which found crows can even recognize human faces.

More recently, Dr. Sarah Jelbert and her colleagues have found that crows can use “mental templates” to make simple tools; that is, they remember the rough dimensions of the tools they need and can make them from scratch. Through careful experimentation, the study provided evidence that crows do not simply mimic tool-making behavior. Instead, they copy the design of tools, transmitting mental templates of useful objects from one to another. This suggests that crows may have cumulative “tool-making culture” that is analogous to human cumulative culture (i.e., passing down and building upon information).

All said, the crow family is much smarter than we once thought. Of course, Western scientific categorization of animal intelligence is often heavily biased towards human-like expressions of intellect (Descola 2013). Studies revealing that crows have advanced intelligence would not be particularly surprising to many other cultural groups around the world that have long recognized crows and ravens as amongst the most intelligent of animal species. A cross-cultural survey focused on nonagricultural societies (agriculturalists are apt to see birds as pests), shows us that crows are often regarded as tricksters, allies, and sacred beings. Although the specific relationships with crows and ravens differ widely from culture to culture, many beliefs and myths about crows in other societies involve their unique cognitive abilities and therefore indicate that people recognize their high animal intelligence. 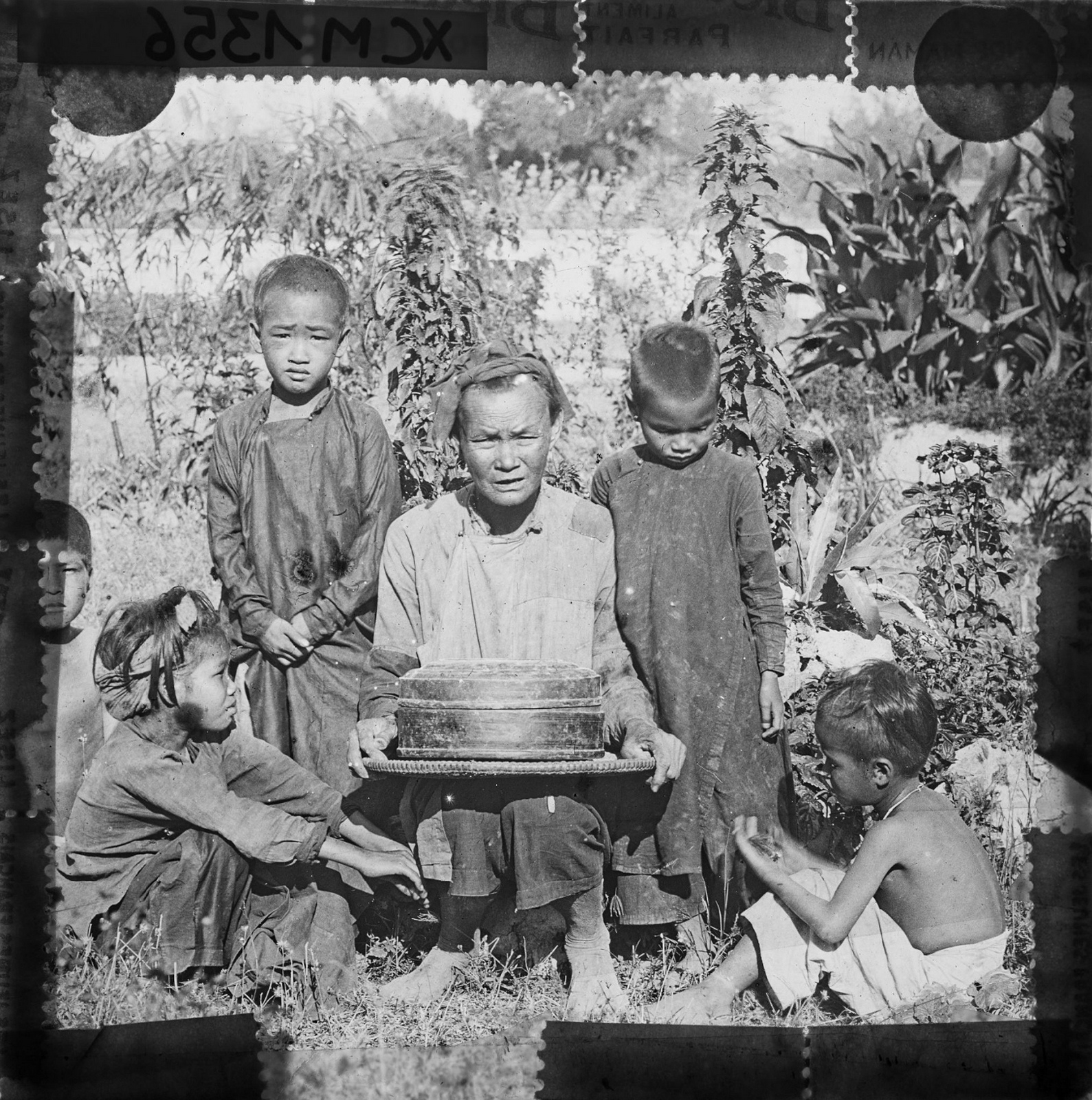 An Annamese woman with her children in the garden, circa 1904. By manhhai. CC by-NC 2.0 via Flickr.

The Vietnamese people during the 19th century (formerly known by French Colonials and early ethnographers as the Annamese people) had semi-domesticated crows. They kept crows within human company because of their extraordinary intelligence and ability to communicate. In 1881, A. Landes notes “Crows (corone macrorhyncha) may also be trained to speak, and since they are more intelligent than the other talking birds, they are much more highly valued.” Landes goes on to note that the Vietnamese used crows as household monitoring guards, saying “It is claimed that a crow can guard the house of his absent master.”

Furthermore, Landes’ data suggests that the Vietnamese believed crows could recognize individual people. Writing on this unique cognitive ability, Landes notes “A story has been told of one of these birds that revealed a wife’s infidelities to her husband, as he came back from a journey, whereupon the husband killed her” (Landes 1881, 10). A crow transmitting specific information about an infidelity may sound far-fetched, but the ethnographic information is telling nonetheless. Stories like this indicate that, during French colonial rule, people in Vietnamese society regarded crows as intelligent creatures with specific understandings of social relationships. The ethnographic data also suggests that Vietnamese people were aware of the crow’s cognitive ability to identify individual faces. 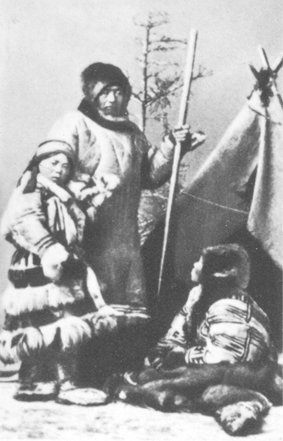 1860 photo of a Nenet family by Andrey Denyer (Public Domain).

The Nenet (formerly Yurak in Northern Artic Russia) people address crows when they are encountered and also adhere to prohibitions related to killing crows. Both of these dispositions are related to the Nenet belief that crows are sacred beings. Toivo Lehtisalo and Freida Schütze (1924, 55) note that the Nenets believe crows to be so sacred that modern weapons are harmed when used against them; “If someone shoots a crow, his gun is useless after that.” For the Nenet, sacredness of the crow is related to the belief that crows have a special connection to the greater landscape which gives them unique knowledge regarding the terrain and the actions of people. Lehtisalo and Schütze (1924, 55) describe how this belief plays out when Nenets travel, “if the forest Yurak moves to another place and if a crow flies along ahead of him, the bird disappears shortly before the destination has been reached. It is believed that the bird knows whither the man is moving.” Beyond navigation, Nenets regard crows as having the ability to see into the future, “If a crow cries kaee, kaee, kaee, guests are due to arrive within three days. If he cries in a strange way as though someone were beating him with a stick, it means something bad” (Lehtisalo and Schütze (1924, 56).

Extended Cognition of Thought and Memory 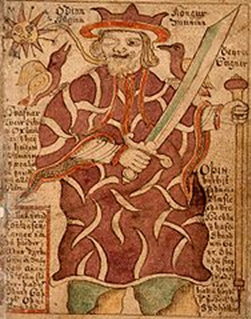 The one-eyed Odin with his ravens Huginn and Muninn and his weapons. From the 18th century Icelandic manuscript SÁM 66 (Public Domain).

In Viking culture, crows or ravens are considered especially important because they are the helper spirits of the powerful god Odin. As early as the 6th and 7th century, visual depictions show Odin accompanied by ravens or crows. The names of Odin’s animal helpers attest to how the Nordic peoples perceived these intelligent birds. Respectively pronounced “HOO-gin” and “MOO-nin,” the name Huginn refers to thought and Muninn as memory (Orchard 1997). With the ability to fly and communicate with Odin, Viking mythology indicates that Viking peoples may have believed that crows could intelligently perceive human action. By intelligently communicating, Odin’s animal helpers Huginn and Muninn, extended Odin’s senses and therefore also his personhood. Icelandic historian Snorri Sturlson (Simek 1993) describes this relationship that extends Odin’s senses beyond his own body:

“Two ravens sit on his (Odin’s) shoulders and whisper all the news which they see and hear into his ear; they are called Huginn and Muninn. He sends them out in the morning to fly around the whole world, and by breakfast they are back again. Thus, he finds out many new things and this is why he is called ‘raven-god’ (hrafnaguð).” 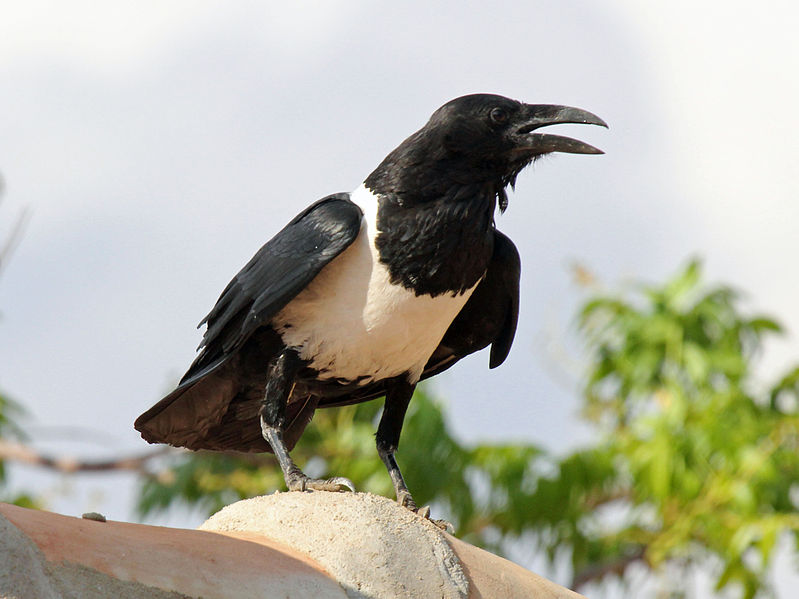 Pied Crow by Dick Daniels. CC by 3.0 via Wikimedia.

Writing about Nuer society, the legendary anthropologist Evans-Prichard (1956, 80) indicates that pastoral African Nuer people had great respect for the pied crow. More specifically, Evans-Prichard notes that the Nuer have a religious, totemistic and sometimes familial relationship with crows. He notes “The jakok in rol, the pied crow, a bird which frequents Nuer homesteads, is especially favoured because it is the bird of the female spirit buk, the mother of deng. Nuer say that ‘everyone respects the pied crow’, and one sometimes hears it spoken of as kuaar, priest. Nuer can therefore readily entertain the idea of a bird being the totem of a lineage, being, that is, an emblem of Spirit conceived of in relation to a lineage” (Evans-Prichard 1956, 80).

This brief cross-cultural survey of human-crow relationships demonstrates that the societies of the Annamese, Viking, Nenet, and Nuer regarded the crow as a special animal. For these cultures, the crow stood out for its intelligence, memory, knowledge, leadership, sacredness, and other culturally unique qualities. Although similar in many regards, the beliefs and practices described here vary because they arose in the context of local history and engagement with local environments. The variance in crow beliefs could be further explored by continuing research on the topic of human-crow relationships. Studying the cross-cultural knowledge and practices related to human-crow relationships could potentially enrich Western scientific understandings of crow intelligence as well.