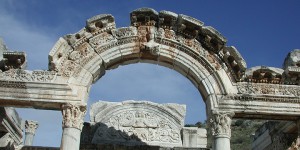 The Imperial Romans period ranges over a time span of nearly 500 years, from 27 BC to 476 AD, with a primary focus on the city of Rome, and secondarily on the Roman Empire at the height of the Imperial period (first to second centuries AD). By the middle of the second century AD the Roman Empire had conquered most of the then known world – North Africa (Morocco, Egypt), Gaul, Spain, parts of Germany, Britain, Central Europe, and parts of western Asia. Government in the Empire was centered in the city of Rome under the emperor, his advisers and personal staff in the administration. At its height the Roman Empire consisted of approximately 40 provinces and an aggregate of cities and towns enjoying varying degrees of self government according to the status granted to each

Learn more about the Roman culture in eHRAF World Cultures, a database for ethnohistorical studies. Once logged on you can explore the Browse Cultures for brief overview of this culture, or the Culture Documents for the collected and indexed works. In Advanced Search you can search the culture and others for subjects and keywords.