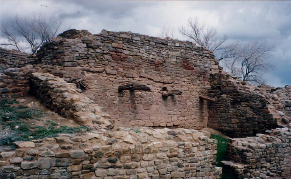 The Early Anasazi tradition is found in southern Nevada east across southern Utah to southwestern Colorado, northern New Mexico and northern Arizona from 1300-700 BP. The people were sedentary horticulturalists who lived in pit houses in the early part of the tradition and in above ground adobe or stone houses or apartment blocks in the later part of the tradition. They grew corn, squash, and beans but also relied on wild plants and animals. Turkeys were domesticated. Around the San Juan Basin settlements were connected to Chaco Canyon by roads. Towards the end of the time period there is evidence of endemic warfare as settlements are sited in extremely inaccessible locations and have defensive walls.

Learn more about the Early Anasazi tradition in eHRAF Archaeology, a database for comparative archaeology. Once logged on you can explore the Browse Traditions for brief overview of this culture, or the Tradition Documents for the collected and indexed works.  In Advanced Search you can search the Early Anasazi and other prehistoric cultures for subjects and keywords.