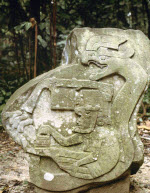 The height of the Olmec tradition dates from 3400 to 2100 BP, although the entire span may run from 3600 to 1750 BP. The Olmec cultural core area is the Gulf Coast plains and foothills of the Isthmus of Tehuantepec (southern Veracruz and western Tabasco States, Mexico). Subsistence included maize agriculture, but remained quite generalized. At its height, Olmec culture expanded its influence from Central Mexico to northern Central America in the form of trading outposts and/or colonies, introducing other early stratified societies to a politico-religious ideology that arguably laid the groundwork for all subsequent Mesoamerican civilization. Olmec society is distinguished by what appears to be a hereditary ruling class, incipient urbanization, and an advanced degree of specialization as evidenced by multiple cultural innovations: work in greenstone, monumental stone sculpture, large-scale public architecture, and probable numerical, calendar and writing systems.

More about the Olmec in the Browse Traditions section of eHRAF Archaeology. Email hraf@yale.edu for temporary access.