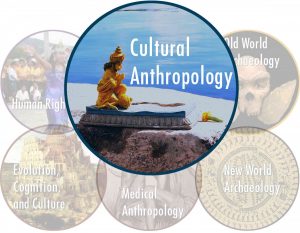 Final exam week has begun for the Fall 2021 semester at the University of Connecticut, which has access to the eHRAF World Cultures database. HRAF’s member services manager Matthew Longcore, who is also an adjunct faculty member for anthropology and archaeology courses at the UConn Stamford campus, has been teaching with the eHRAF Workbooks this fall semester.

ANTH 1000 Peoples and Cultures of the World is an introductory undergraduate course in cultural anthropology. Cross-cultural comparisons help students understand the similarities and differences among extant societies, as well as providing a perspective for evaluating one’s own society and place within it. The course is considered a first year, or freshman level, course. Here is the course description:

An introduction to the anthropological understanding of human society through ethnographic case studies of selected peoples and cultures, exploring the richness and variety of human life. Encourages students to learn about different cultures and to apply their knowledge to make sense of their own society.

An examination of cultural universals and, conversely, cultural practices deemed not to be universal, feature prominently in ANTH 1000. The textbook for the course, Cultural Anthropology: An Applied Perspective, defines cultural universals as “those general cultural traits found in all societies of the world”. “Chapter 2: The Concept of Cultures” features a table titled “Murdock’s Cultural Universals” which is adapted from George Peter Murdock’s “The Common Denominator of Cultures” in The Science of Man in the World Crisis (Linton 1945). Murdock, the intellectual founder of HRAF, identified a cross-cultural list of human universals, which include language and marriage. While it is generally agreed upon that these practices are universal among all societies, other practices such as cannibalism and incest, are not.

This semester Longcore been teaching two sections of the ANTH 1000, each with 50 students enrolled. In both sections, teams comprised of 4 to 5 students make presentations on anthropological topics covered in the course. During the first half of the semester, the presentations were focused on current events and featured anthropology-related news stories presented by National Public Radio (NPR). See our earlier post about UConn students exploring the question: Is Romantic Kissing a Cultural Universal?

In the second half of the semester, student teams made presentations based on eHRAF Workbooks for Cultural Anthropology. Workbook topics covered in ANTH 1000 included kinship, sex and gender, social stratification, politics, art, and globalization.

The Blue Team from the Honors section of the course did an outstanding job with their presentation based on the Sexuality: Premarital Sex workbook. As indicated in the textbook and discussed in class, the list of cultural universals from Murdock includes sexual restrictions. The Blue Team presentation, which is featured here, demonstrates a clear understanding of the topic and thorough analysis.

The Blue Team analyzed the degree of restrictiveness or permissiveness about premarital sexual relations among several societies in eHRAF World Cultures. They concluded that the Libyan Bedouin (MT09), Kanuri (MS14), and Pawnee (NQ18) societies are more restrictive while the Copper Inuit (ND08) and Trobriands (OL06) are more permissive.

If you are interested in the eHRAF databases and your college or university is not a current member, you are welcome to request a free 60-day institution-wide trial.

If you are an instructor who incorporates eHRAF World Cultures in your teaching, or a social scientist teaching about cultural universals, HRAF would like to hear from you. Please contact us at hraf@yale.edu.

Murdock, G.P., 1945. “The Common Denominator of Cultures” in The Science of Man in the World Crisis, edited by Ralph Linton. New York, Columbia University Press, pp.123-143.