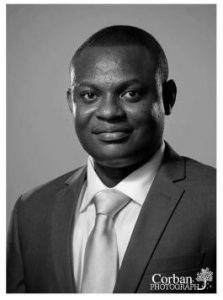 Eric Nana Osei-Akoto is a doctoral student at Akrofi-Christaller Institute of Theology, Mission, and Culture in Akropong-Akuapem, Ghana. As a part-time student who also works full-time, Eric says that electronic sources have proven an invaluable resource for his studies, as he often does not get time away from work to visit the library. Furthermore, the school’s library and the libraries of other universities in Ghana do not always have the sources needed for his writing.

In his application for the HRAF Global Scholars program, Eric mentioned that he had used eHRAF World Cultures through an individual trial, and that the database had been helpful in writing the third chapter of his thesis. “I must say,” wrote Eric, “it contributed immensely to putting the chapter together. In particular, I accessed Harriet Ngubane’s Body and mind in Zulu medicine: an ethnography of health and disease in Nyuswa-Zulu thought and practice, which served as my main source for writing on Zulu concepts of health and illness.”

Eric’s doctoral research examines beliefs about how the natural and the supernatural interact in medicine and healing in the practice of traditional herbal medicine. The research investigates the views of, and attitudes to, traditional herbal medicine by Ghanaian Christians, Muslims, and Primal religious believers. It evaluates the extent of the influence of practitioners’ religious beliefs on modern (often referred to in Ghana as ‘scientific’) herbal medicine practice, a neo-herbal practice that tends to accentuate the application of science and technology and limit or, in some cases, disavow the involvement of spiritual practices.

Traditional herbal medicine is popular in Ghana. According to the World Health Organization, about 70% of Ghanaians use it. Traditional herbal medicine practice has been and still is interrelated with religion and spirituality. Many Ghanaian herbalists double as functionaries of one of the country’s main religions (viz. Primal religion, Islam, and Christianity) and actively involve religious ideas and spiritual beliefs in their practice. Many practitioners believe that sickness could be physical or spiritual in origin and nature. They also believe herbs have a natural potency as well as a supernatural link. Hence, treatment regimens often involve both physical and spiritual remedies.

The research is qualitative drawing on primary and secondary sources. Primary source data has been gathered from the Ghana Public Records, Archives, and Administration Department as well as through in-depth semi-structured interviews of 21 traditional herbalists, 18 patients and former patients of traditional herbalists, 99 Christians, Muslims, and Primal religious believers, and 7 modern herbalists. The research was conducted among Akan, Ga, and Ewe speakers (the three largest ethnic groups in Southern Ghana). All interviews were conducted in the languages of the interviewees, since they were likely to conceptualize better and express ideas about illness and health in those languages. The interviews were digitally recorded and have been transcribed and translated into English.

Presently, Eric is analyzing the data and will finalize the findings by the end of 2022. Other primary sources have included signboards, billboards, banners, posters, and fliers of herbalists, herbal centers, and herbal medicines, as well as herbal medicine interviews and advertisements on television and online (WhatsApp, Facebook, YouTube, and websites).

The research is envisaged, among other things, to elucidate the nature of the interaction between the natural and the supernatural in illness and health, as believed and experienced by the Akan, Ga, and Ewe peoples of Ghana. This will further help consolidate the academic study of spirituality and health within the Ghanaian context.

Eric explains how useful eHRAF access has been to his ongoing research:

Access to the eHRAF databases, particularly eHRAF World Cultures, will be extremely helpful to me in the writing of my PhD thesis, which is in the field of spirituality and healthcare. Having written my introductory chapters and completed data collection and processing, I am about to carry out data analysis and the writing of the remaining chapters. I am positive that the eHRAF databases will provide valuable secondary sources for discussing my findings as they relate to other peoples and cultures presented in similar works and, thus, help develop my thesis.

HRAF is honored to welcome Eric Nana Osei-Akoto as one of our HRAF Global Scholars for 2022. We wish him continued success with his research.