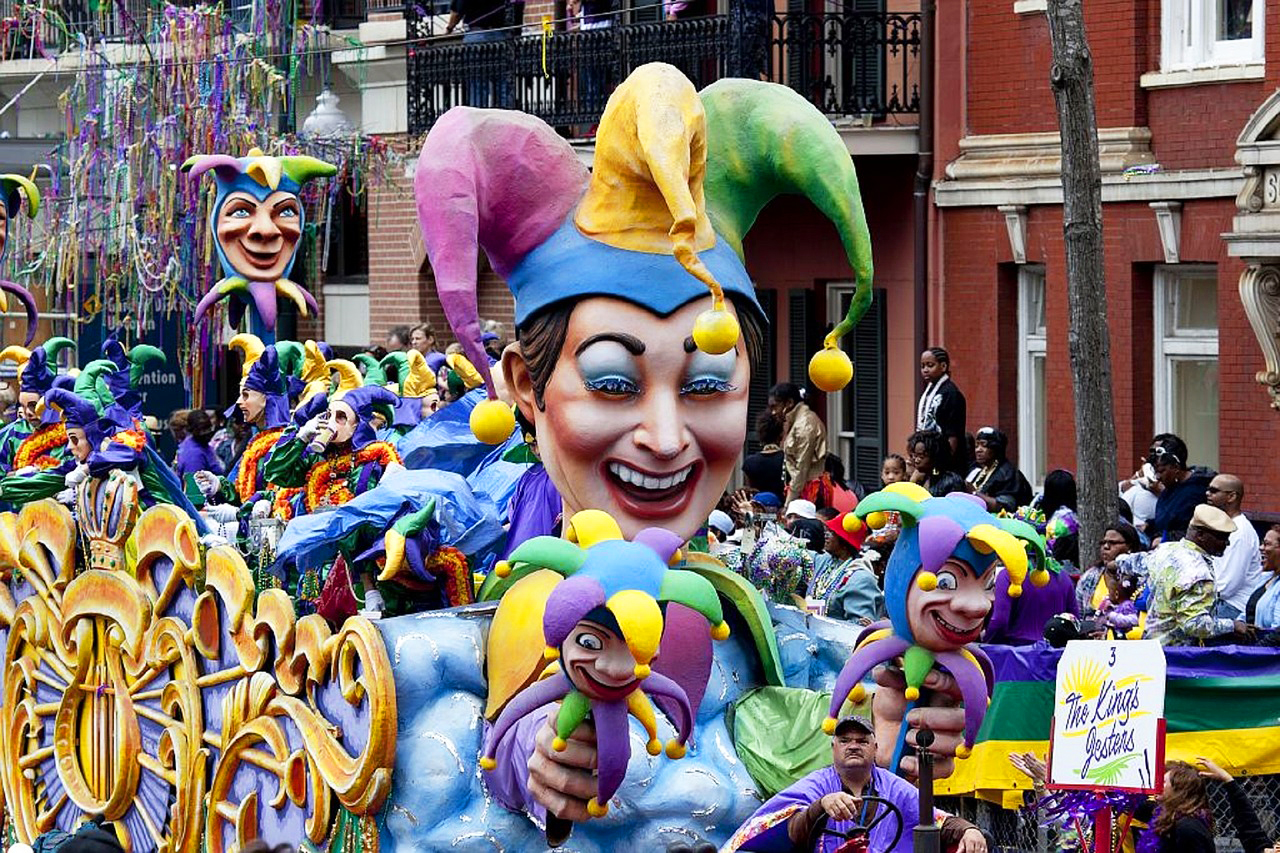 Mardi Gras has become synonymous with the culture and lifestyle of New Orleans and southern Louisiana. “Fat Tuesday” or mardi gras in French, is the name given to the feast day that marks the onset of the Lenten season in the Christian liturgical calendar. Lent, a period of proscribed prayer, fasting, penance, alms-giving, and self-denial among most Christian denominations lasts for the forty days between Ash Wednesday and Easter. Marking the night before this period begins, Mardi Gras embodies the opposite of self-denial, most outwardly expressed via public overindulgence in food, drink, and parties.

Its key elements, including elaborate costumes, masks and processions, are “based on medieval European adaptations of even older rituals, particularly those that included reversals of the social order with the lower classes parodying the elite. Men dress as women, women as men; the poor dress as rich, the rich as poor; the old as young, the young as old; black as white, white as black” (Ancelet 1991: 108). It has roots in ancient springtime fertility rituals reaching back to the pagan festival of Saturnalia, making themes of sexuality and fertility present throughout the celebrations. 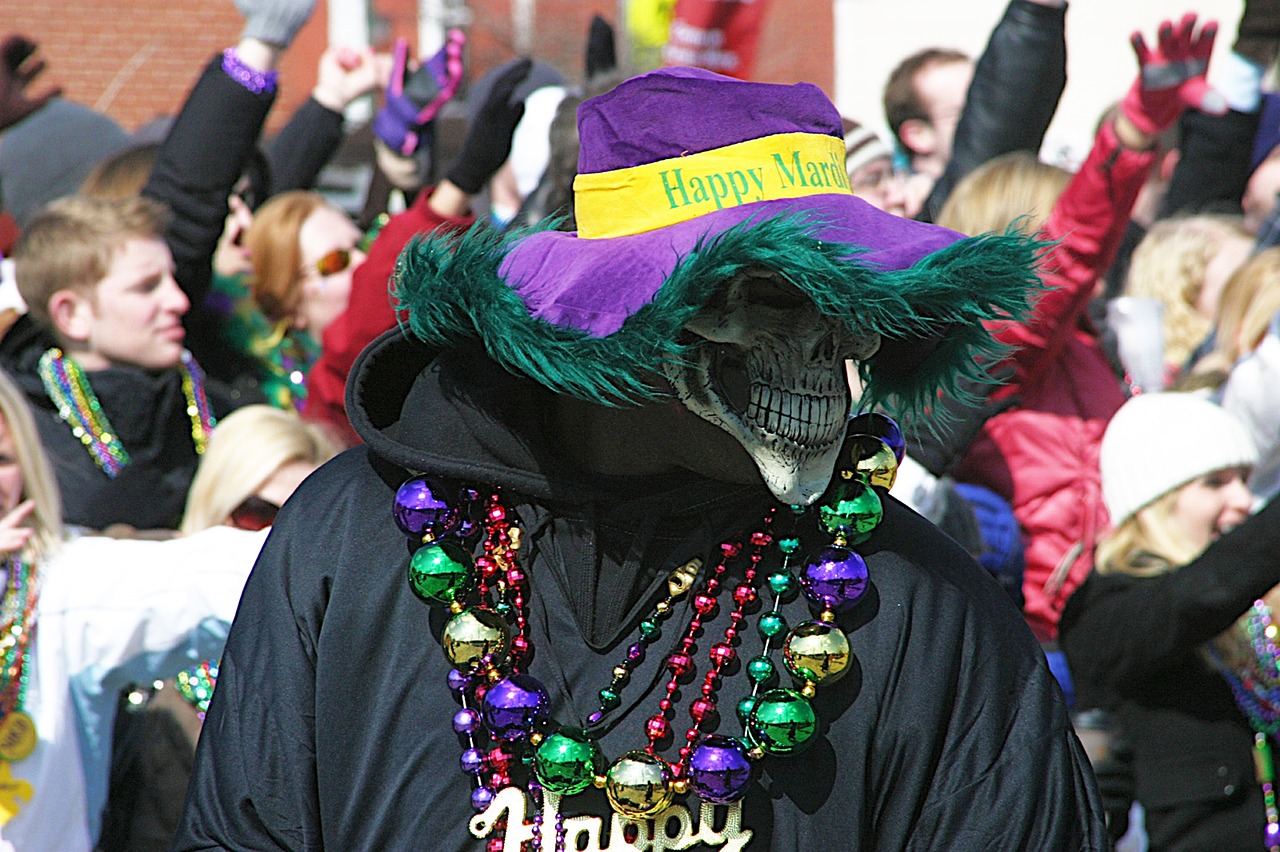 Mardi Gras in New Orleans today, with its colorful floats, street parades, masked performers and drunken revelers, has all the markings of a traditional Carnival celebration as found throughout Europe. Encouraging a playful mocking of social norms, the wearing of disguises to hide identities further allows for a pushing of political and gender boundaries (Ware 2001). During Mardi Gras, one finds a suspension of most everyday rules for street decorum, and all revelers are welcomed to partake in special foods – such as King cake – and cultural rituals. The well-known motto for the holiday is laissez les bon temps rouler! or “let the good times roll!”.

Yet even ritualized chaos “has its own system of rules” that act as a framework for the “play” (Ancelet 1991: 108). Throughout southern Louisiana,

Mardi Gras is usually a processional celebration. Groups of revelers move through towns and countryside alike, taking the celebration to the places they visit and invading public spaces such as roads, making them impassable, and commercial districts, rendering them inoperable. Masks provide anonymity and an opportunity to shed inhibitions and to act out roles for the day. The ritual altering of consciousness, in this case through the consumption of alcohol, enhances the ability of participants to play beyond themselves (Ancelet 1991: 108).

New Orleans is known far outside Louisiana as the epicenter of Mardi Gras. The French Quarter teems with parading performers and elated onlookers. But much of the popularized activity we recognize against the backdrop of the infamous Bourbon Street are simply the most commercialized and risqué versions. For instance, tourists from around the world descend on New Orleans hoping to catch beads from the famous “throws” from the members of Krewes atop their floats. Krewes are social organizations whose members stage the vibrantly decorated floats that have been parading throughout the French Quarter on Mardi Gras since 1870. Krewes each have unique histories and themes. Although the atmosphere may seem chaotic, the practice of riding a float comes with rules; for example, by law, all float riders must wear a mask while parading. 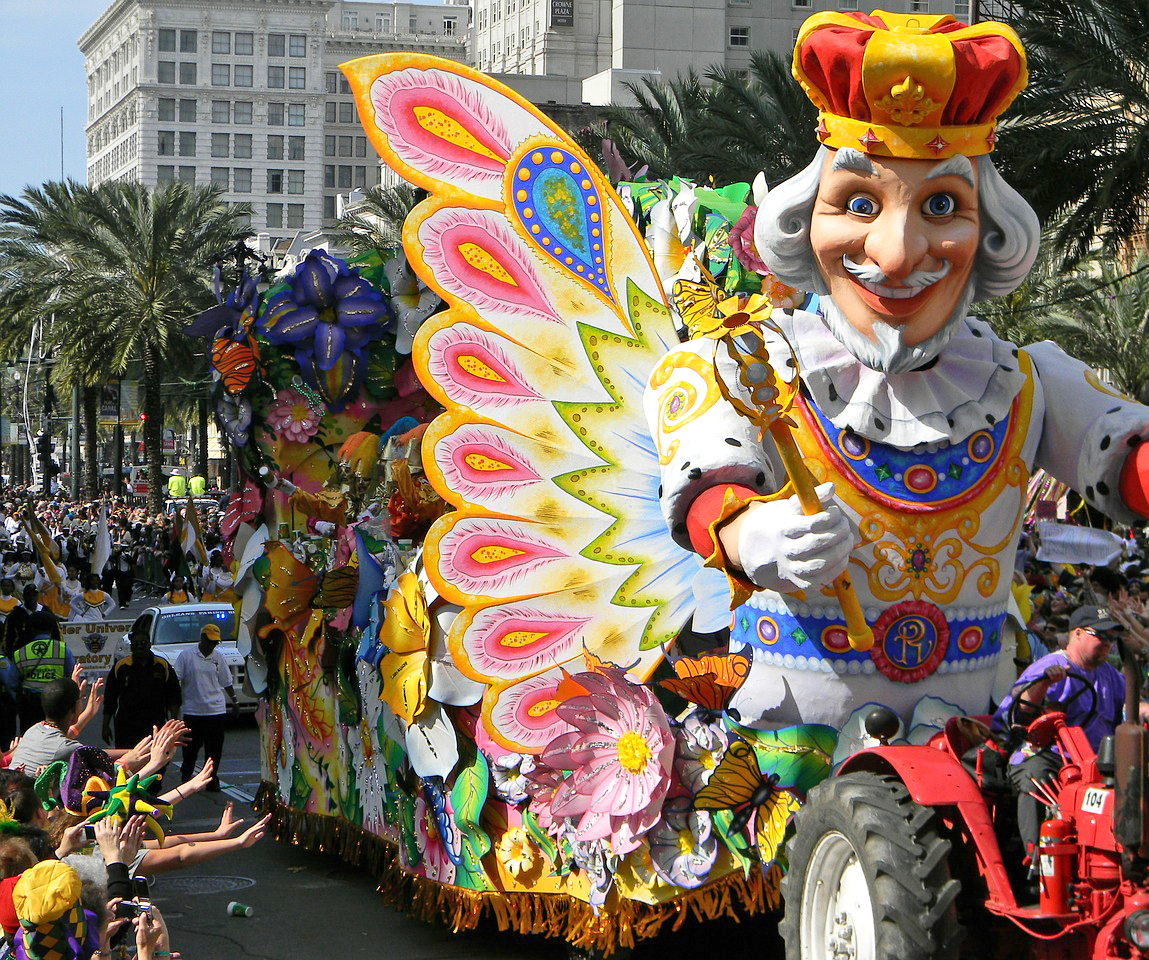 So why toss items to the audience? Giving and receiving are central to Mardi Gras. Alongside cheap beaded necklaces thrown to tourists,

inside the local New Orleans’ Mardi Gras gift economy, krewe-specific throws come in the form of trinkets, toys, or medallions, the most special of which are given to locals who understand their value and will be more likely to save and cherish them. These handmade throws provide opportunities for social interaction, opening a door for conversations between people from the area who might not otherwise meet (Philips 2016).

The giving of gifts and sharing of foods and public spaces with strangers is part and parcel of the community-building aspect of the celebrations. As we will see below, gift-giving, donating, and even begging, are longstanding traditions in Cajun Louisiana.

Nonetheless, there is some anthropological debate as to whether of not Mardi Gras activities actually instill any sense of “communitas” or fellowship among revelers, or if it simply reinforces more individualistic and egoistic traits among participants (Jankowiak and White 1999). While the crowded and commercialized urban Mardi Gras setting of New Orleans may “constitute another urban festival filled with strangers who share nothing in common except agreement not to interfere with one another” and appears “intensely self-centered, individualistic, and, with the exception of performers and the familiar folk that one arrived with, studiously noncommunal” (ibid: 347), there is more than one way to celebrate Mardi Gras in Louisiana.

One need only depart the city and head some 100 or so miles northwest into Cajun Country to discover that it is “celebrated in the rural Cajun areas as enthusiastically as but quite differently from its manifestation in New Orleans” (Esman 104).

The Cajun or “country” Mardi Gras is also based on a procession, and it likewise constitutes a “rite of reversal” through ritual performance (Sexton 2001). However,

unlike its urban counterpart, it stems from the medieval fête de la quémande, a ceremonial begging ritual, modified by frontier influences. The fête de la quémande was celebrated by a procession of revelers who traveled through the countryside offering some sort of performance in exchange for gifts. […] In the [courir] de Mardi Gras, masked riders visit farmhouses, singing and dancing to the traditional Mardi Gras song (Ancelet 1991: 108).

In the early morning, lines of colorfully disguised horsemen wearing capes, fringed costumes, pointed capuchon hats, and the obligatory masks, take a pilgrimage route through the countryside, house by house, singing Mardi Gras songs along the way. The objective? To chase down chickens donated and released by local farmers:

The goal of these performances is to obtain a contribution to the communal gumbo, to be shared later that day. The ideal gift is a live chicken, which is released by the homeowner and must be captured by the celebrants who are hampered by masks, costumes, and their various states of inebriation. This entails considerable buffoonery and generates great merriment and entertainment for the members of the visited household (Ancelet 1991: 108).

The courir de Mardi Gras or Mardi Gras run, named for this chase, combines anonymity, debauchery, begging, gifting, communal solidarity, and perhaps the most recognized Cajun feature of all: food. In this way, another ritual transformation takes place. The work of creating the gumbo becomes play when runners take considerable trouble chasing chickens and performing for their donors in order to procure the ingredients and prepare the feast (ibid).

According to Esman, Cajun food festivals – of which there are many, including Mardi Gras among them – “induce communitas in a variety of ways” (Esman 1981 36). Gumbo is a staple of of Cajun culture and the run makes its preparation a community effort. When the runners return from their chases, the donated food is prepared all together by the townspeople in giant vats for a long night of enjoyment and social bonding. Each householder contributes an ingredient to the gumbo “in a public, ritualized way” during the visits by the runners, and then the community “serves as its own ‘host’ for the evening meal of gumbo” (Gutierrez 1992: 142).

The Cajun Courir de Mardi Gras as a festival honoring gumbo also provides insight into Cajun food culture and identity, as described in this passage from the eHRAF World Cultures collection on Cajuns:

Thus special Cajun food events demonstrate both environmental competence and sociability at the same time. These two aspects of Cajun identity, when exaggerated or taken out of their larger cultural context, give rise to two prevalent negative stereotypes of Cajuns. An exaggerated emphasis on environmental skills leads to the image of the isolated, xenophobic, violent swamp dweller, who is more at home in the wilds than in the company of other people. An exaggerated emphasis on sociability yields the image of the happy-go-lucky, hedonistic, lazy Cajun, who has no desire or need to work hard in such a fertile homeland. However, a Cajun or outsider who attends one of the special Cajun food events described here sees that Cajuns work hard and play hard. In everyday life, work and play are often relegated to separate spheres. However, food events belong to both spheres, and food itself is the product of a series of work activities that culminates in a pleasurable social activity, a good meal (Gutierrez 1992: 143).

Whereas urban revelers beg for beads from the Krewes on their floats parading through the city in order to collect a piece of Mardi Gras for themselves, the begging ritual and ensuing chase at the heart of Cajun Country serves to collect donations of food that go right back into the sustenance of the local community. This makes the reinforcement of social bonds and evidence of communitas fairly prevalent in rural Mardi Gras celebrations in the Cajun countryside compared with the larger urban spectacles of New Orleans. After all, the gumbo could not be made without the contributions of all involved in the run (including the chicken). 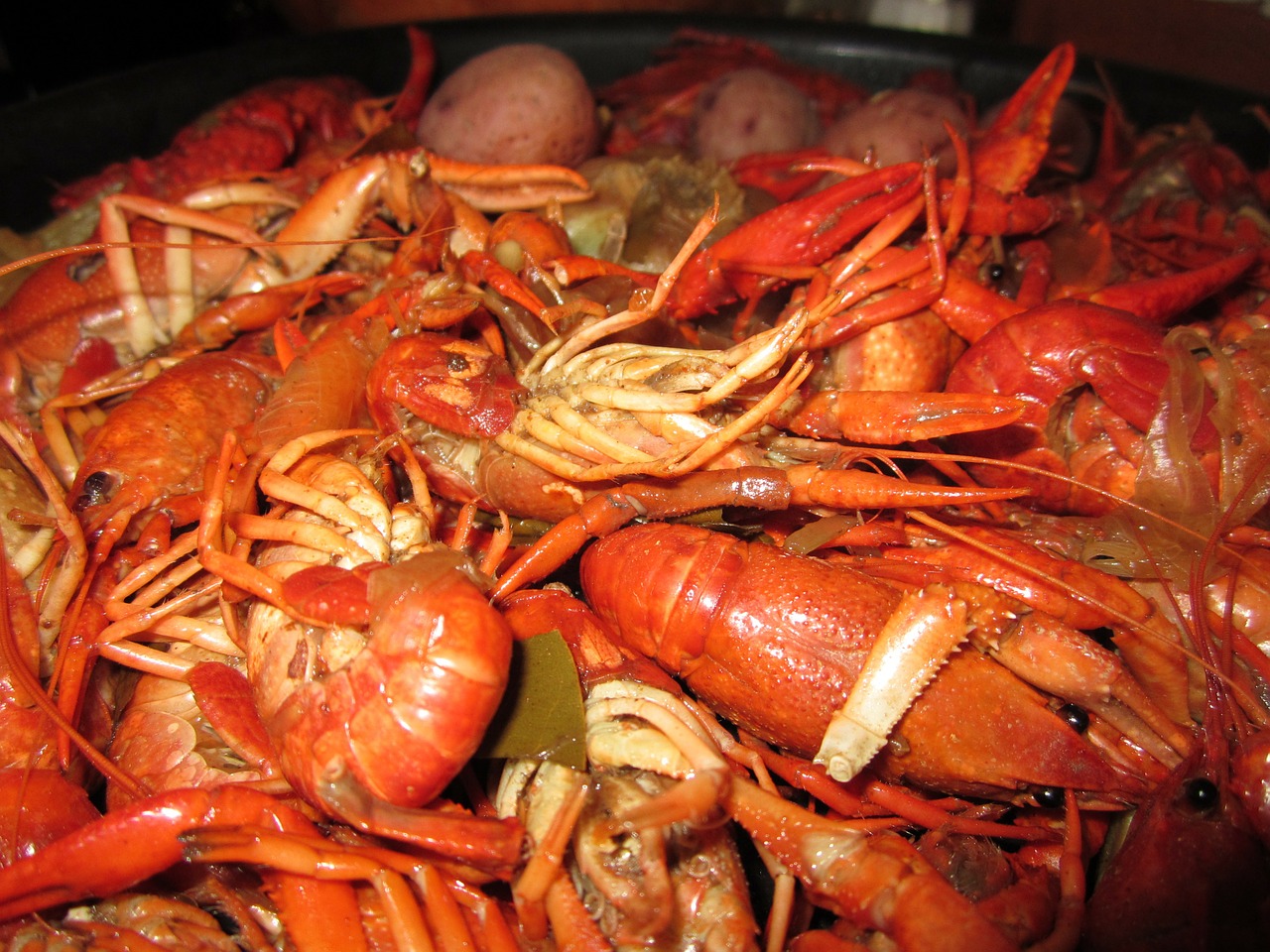