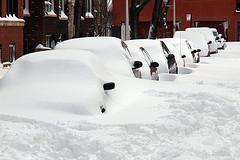 Here in New England, a deep freeze has blanketed homes and streets with snow and ice this winter, making for treacherous and exhausting conditions including power outages, frozen plumbing and unending traffic congestion. With the weather foremost on many people’s minds, we are doing our best to stay keep safe and warm until spring arrives. Hopefully, this stormy winter won’t last much longer and things can get back to “normal”.

While major cities in the US may be struggling with this harsh weather, there are numerous cultures around the world that survive in similar or worse conditions for much of the year. Humans show an amazing capacity to adapt to the coldest temperatures and in the most remote reaches of the planet.

A cross-cultural approach to winter weather offers much to teach us about how people around the world deal with extreme cold. Evidence from the eHRAF World Cultures database illuminates what life is like for societies who regularly endure tough winter conditions [1].

A prime example of developed cold weather resilience can be found in Gusinde’s historical description of the Ona people from Tierra del Fuego from the 1920s, whose cold tolerance he readily contrasts with his own:

Direct physical contact with snow is something to which we are not accustomed, it is true, but probably it is stimulating and healthful in small quantity, provided one may exercise to keep the blood circulating and one is not oppressed by fatigue. But the Ona had no warm houses to temper the cold, not even a roof to avert the blasts of storms. In the old days the Ona men, wearied by the chase of game, wrapped their robes tight and slept with bare legs in the snow, using a block of frozen meat for a pillow. To be sure, they were inured to cold from childhood, but only a people of magnificent physique and robust constitution, materially equipped as were the Ona, could have faced the long dark winters of Tierra del Fuego, the deeply piled snow of the forests, the glaring sheet-ice of the open plains (1931: 51-52).

Sleeping on a frozen block of meat certainly puts the task of shoveling snow from the driveway each morning into perspective! The ability for humans to withstand extreme conditions shows the broad extent of human adaptability to the natural environment. For those not accustomed to it, the harsh weather can seem impossible to endure; yet people in the furthest and coldest reaches of the planet manage to adapt to their physical environments and modify their living conditions accordingly.

Similarly, Maiskii (1921: 386) describes how the brutal conditions of a typical Mongolian winter will challenge even the boldest traveler:

In winter there is nothing idyllic about sleeping in the steppe: in cold and wind the tent affords poor shelter indeed against the all-pervading freeze; even if it is heated with an iron portable campstove, your hands and feet grow still, your blood chills in your veins, your thoughts grow confused in your head. Winter-coats and blankets relieve the situation only partly. Also well-accustomed to the cold are the reindeer-herding Chukchee (Chukchi) people who have inhabited the remote Russian tundra of northern Siberia since ancient times. This brief description from 1895 reveals the harsh weather conditions that they have adapted to: “In the most impossible of weather, they often spend several agonizing days with their herds without rest day or night, without fire, almost without food, and without any shelter. One must see these conditions and experience and terror of a northern blizzard in order to understand the incredible strength of these people” (Zhornitskaya and Wanner 1996). There are still approximately 16,000 ethnic Chukchi’s in Russia today, but a much smaller proportion maintain their traditional lifestyle in the frozen tundra. For those who continue herding, life at frozen temperatures not guided by their own comfort, but by the needs of the reindeer [2].

Enduring exposure to cold weather therefore not only takes a great deal of physical strength and fortitude, but communal planning and cooperation.

It is easy to overlook how much climate influences most human activities and even societal organization. One area which is directly controlled by the climate is the construction and layout of residential structures, dwellings [3] and homesteads as well as the permanence or impermanence of settlements throughout the seasons. 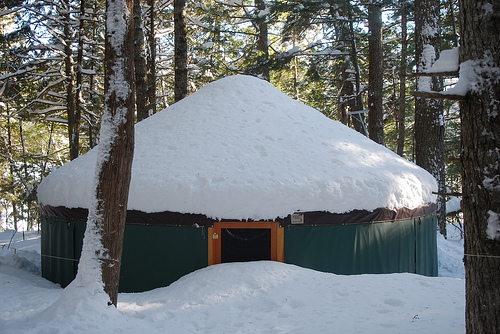 Goldstein and Beall (1994: 58) describe how the “ger” or “yurt”, the traditional dwelling for Mongolian nomads, is constructed to enable survival and heat retention even at the lowest temperatures:

The ger roof consists of 40 to 50 thin poles (12 per lattice section) attached to the wall by rawhide loops and stabilized by fitting into notches in a circular wooden “keystone” at the top of the tent. Insulation and wind protection come from one or two layers of felt sections […] tied tightly with straps that circle the ger like ribbons on a huge birthday gift. When the herders fire up their metal, yak-dung stoves, the temperature inside the ger becomes quite comfortable. We could sit five to six feet from the fire without a coat when the temperature outside was in the low teens (fahrenheit). And after the fire died out at bedtime, the temperature inside the tent remained 15-20 degrees warmer than outside. But we could never forget the cold; when the outside evening temperature fell below 0°F, the inside temperature dropped well below 32 °F and froze our water and meat each night.

Yurts are not simply for small, private dwellings. Depending on how many walls or “khans” make up the frame (five or six is typical, but 10-khan yurts are possible), they can hold up to 300 people or even house an entire Buddhist temple (Maiskii 1921: 116).

Meanwhile, thousands of miles away in North America, historical accounts of the Klamath and Modoc peoples of Northeastern California and Southern Oregon (Barrett 1910: 243-244) reveal that a special type of seasonal dwelling was necessary due to the deep snows common in the winter. This took the shape of a semi-subterranean earth lodge:

Its conical roof of poles was covered with mats and brush and finally with a thick layer of earth. One of these lodges was sometimes as much as forty or fifty feet in diameter and from fifteen to twenty feet high. There was no door in the ordinary sense of the term, but the house was entered through an opening near the apex of the roof, which served the double purpose of door and smoke hole. To enter it was necessary to walk up on the sloping conical roof to the opening and climb down by means of a vertical ladder inside.

And similar to the Mongolian yurt, these lodges were said to have been so warm that little extra heating was necessary to maintain a comfortable temperature inside (ibid).

In addition to building styles of dwellings, the weather can also affect the broader layout of a settlement. That is, the orientation of buildings within a settlement can act as a form of climate control in itself (Horne 1994: 98). Surprisingly, there are some commonalities between how this works across both hot and cold climates, as indicated with this example from an Iranian village:

The clustered, wall-sharing plan characteristic of Near Eastern villages is frequently explained as an adaptation to a hot, arid environment. Such an explanation is not adequate in Khar o Tauran because, as stated above, cold, not heat, is the more severe thermal constraint. Still, what works to regulate hot temperatures works to regulate cold ones; shared walls and winding alleys provide insulation from cold, too. Where climates are extremely cold, in high mountains or farther north, houses change shape altogether and become multiroomed structures sheltered by a single roof (Horne 1994: 98-99).

Thus, how humans adapt to their surroundings in coordination with their environment has a direct and meaningful impact on societal interactions in a number of ways, including how and where they live (settled or nomadic) as well as the relative size and layout of communities and homes. 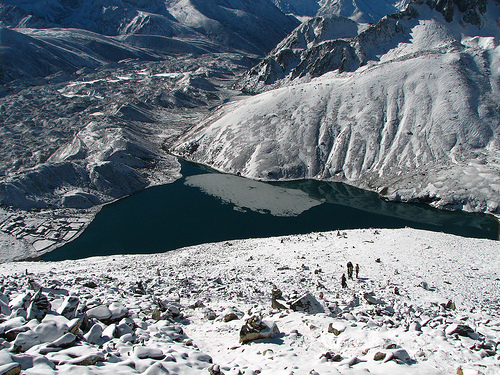 After just a few days of snow here in New England, we are easily reminded of just how much climate affects day-to-day life. But while we may see the snow as a massive inconvenience – our daily activities plagued by freezing rail lines and roads congested with snow and slush – sometimes we must also be reminded not to overlook the majesty of winter for all its small hassles. We can learn instead from the cold weather dwelling cultures described above as well as the Himalayan Sherpas of Nepal. Although Sherpas continually battle against an unforgiving mountainous landscape, their snowy white surrounds never cease to inspire:

The sensuous quality of the scenery which is encountered in Khumbu cannot be ignored … Sherpas, too, are awed by their surroundings, even though the scenery is an everyday experience to them. The huge mountains and deep valleys reduce man and his realm to minuteness. … It causes him to look with awe upon the environment which towers around him. … The environment pervades the senses, for it seems that it does not belong to man. It is a world of rock and ice superimposed upon the world of men. They live on the fringe of the inhabitable. Danger and security, grief and joy, terrifying awe and unbelievable beauty unite in a form of life unique in the world (Jerstad 1969: 76).