Culture represents shared norms, values, ideas and patterns of learned behavior. Because culture is learned, it is both symbolic and ever-changing. It is also adaptive, which means it allows populations to respond to environmental changes as well as social ones. An individual may belong to overlapping cultural spheres at any one time. For example, some cultural identities can be based on ethnicity, nationality, language, gender, or age, or a combination of these.

Ethnocentrism is when a person believes that his or her own cultural values and ideals are the best and most valid way to behave. Because we each grow up surrounded by familiar practices, or people who mostly act like we do, it is not unusual to find some ethnocentrism in all cultures around the world. However, extreme ethnocentrism and intolerance of others is the basis for racism, xenophobia, and ethnic conflict, among other forms of violence.

Cultural Relativism is the idea that other people’s lives, values, and beliefs should be respected and understood on their own terms rather than based on how closely they might match up to an outside observer’s own cultural standards. This approach requires one to suspend judgement about practices that may seem unusual or even “wrong” at first glance, and to attempt to look at the world through the eyes of another.

For cultural relativists, no single culture is superior or inferior to another. While cultural relativism represents the opposite of ethnocentrism, in its most extreme form, absolute relativism suggests that there is no way to judge any human behavior outside of its cultural context. This can similarly be used to justify atrocities or human rights violations.

It is by exposure to other ways of life that people can begin to challenge the assumption that their culture is the “best” or only way to live. Anthropologists combat ethnocentric ideas by living among other cultures or communities. Through ethnography, they show that it is possible to learn and adapt to different cultures and their distinct ways of living, and that all cultures share important similarities as well as differences. Furthermore, anthropology teaches us that all cultural groups are constantly learning and adopting ideas from one another. Cultural diffusion – or the spread of cultural beliefs, practices, and material artifacts across populations – leads to the sharing of thoughts and behaviors between groups. 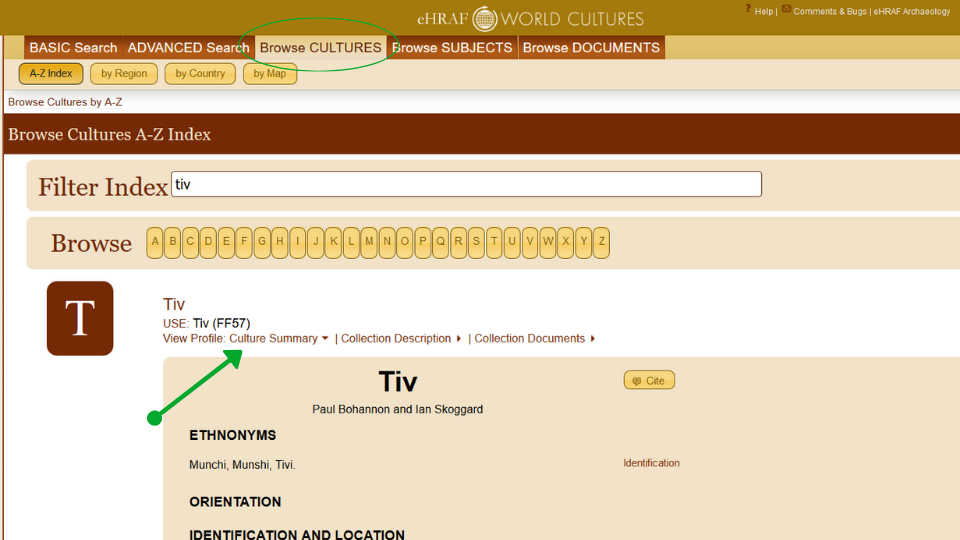 List the culture names, OWCs and geographic location for each column, as well as the topics you have chosen for each row. Then, fill in a synopsis or quotation from the ethnographic data in the eHRAF culture summary. The sample table below has been filled in with one example. Remember that you can choose any topics and cultures you like.

Once your table is complete, compare your chosen aspects of culture across your selected regions. What similarities and differences have you found?

Then, compare what you found to what life is like in your own culture. Have you found any similarities or differences?

Share your answers with one or more classmates. Compare your cultural findings from eHRAF as well as and the key aspects of the culture(s) that you belong to.