The idea behind Nascent Worlds is for students of anthropology to imagine themselves as ethnographers encountering an entirely distant culture for the first time. What would they discover at this moment of first contact? Over time, by exploring the different areas of life in that society, the alien anthropologist must file a report with an intergalactic board of ethnographers. Who are these beings, and what has been learned about their culture?

This activity works best for students working in small groups. They may work together on all features of the culture creation or divide up the various social, economic, political, and religious aspects and combine their efforts into a whole. Students should present a narrative of the distant culture, describing all features in as much nuance as possible.

The presentation can be a combination of text, video, a PowerPoint presentation, original graphics, artwork, or performance. Presentations should dedicate at least one slide per facet of culture. Additional activities might include dressing as members of the culture and enacting an aspect of daily life or a ritual. Virtual classrooms can create digital cultural materials to display online, or members of the team can dress as representatives of the society and answer questions from the class about their culture.

Imagine that you have encountered a distant culture for the first time and are invited to live among them as an ethnographer. Write a “culture summary” or overview of the society. What do they look like? How do they live? Name and describe the culture and its facets, including the “rules” governing society along with an origin story, mythology, or explanatory secular cosmology. A sample list of cultural traits to include in the summary can be found in the accompanying PowerPoint.

Your society does not have to outwardly appear humanoid or reside in hospitable environments as they exist on planet Earth. Perhaps they are invertebrates, merfolk, or silicone-based lifeforms. However, they must have a set of cultural traits and a history that can be detailed through (imagined) participant-observation.

The social and cultural features “observed” by intrepid student ethnographers must make internal sense from an anthropological perspective. That is, the practices, dwellings, cosmologies, laws, norms, symbols, and rituals should all align within the established logic of the invented society. For instance, when it comes to describing how merfolk (sea-dwellers) came to exist, you might describe what pervasive power and importance that water may hold in such a society.

Refer to Murdock’s concept of human universals, such as love, marriage, food taboos, religion, or music, for ideas of how certain themes connect throughout human thought and behavior. 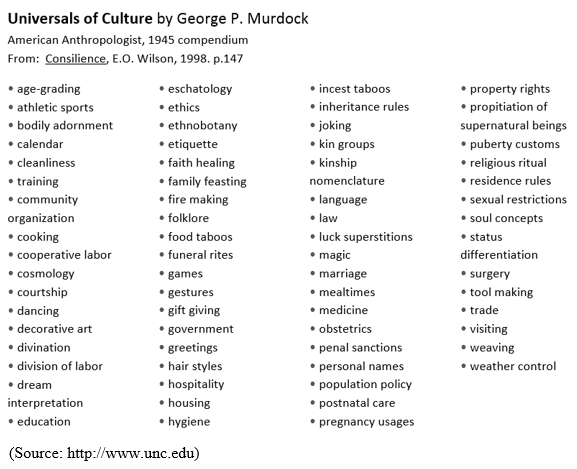 Societies are continually changing. Your cultural stories should address the past as well as the present, and future trajectories of the society. For instance, you might wish to describe prehistoric artifacts uncovered by your team’s archaeologist. What significance does the artifact have for the society? With regard to the future, examples include: how will the culture respond to a global catastrophe that may threaten the ecosystem if action is not taken? Will new scientific discoveries or technological advancements threaten to efface long-held traditions?

eHRAF World Cultures contains a wealth of ethnographic data about hundreds of societies around the world. To build a comprehensive list of cultural traits, students should use Culture Summaries in eHRAF as a model for their assignment.

eHRAF Culture Summaries describe various aspects of the cultures that are in eHRAF, including where a culture is from, the geographic and environmental conditions, historical background, and how people live: their political and economic systems, kinship and descent, belief systems, etc. A general outline and headings are the same for each summary so that they can be easily compared. The headers can be used by students as the building blocks for creating their own summaries.

Use Browse Cultures to explore cultures. Click on the name of the culture to access the Culture Profile and read the Culture Summary.

Once their basic outline of the culture is complete, students may wish to search the database to find more specific comparative examples using subjects and keywords of their choice.

Below is an example list of cultural facets with questions that may be addressed when building the cultural description for the assignment. Students should endeavor to include additional topics. The slideshow version is supplemented with snippets from culture summaries in eHRAF World Cultures.

Cover image by tos from Pixabay