The Earth is around 4.6 billion years old. Physical evidence of geological changes and the mineralized remains of living organisms (fossils), as well as material remains and artifacts of human societies, offer archaeologists important insights into the past.

Archaeologists seek to place discoveries within a broader historical framework; in other words, to get a sense for the time period that an object comes from and how it relates to other finds, times, and places in the archaeological record. This helps to build a better picture of how humans lived in the past, as well as how humanity, culture, and societies evolved over time.

There are a variety of scientific methods that archaeologists use to analyze the age and origins of fossils, remains, or other artifacts. Dating methods can enable bio-archaeologists to determine factors such as environment, diet, health, or migration patterns of humans, plants, or animals. Knowing the age of an object of material culture, how it was made, and the surrounds in which it was found, also help classical, historical, or ethnoarchaeologists to better hypothesize the purpose or cultural meaning that might have been attributed to it in the past. Ordering archaeological finds within time periods across traditions is how archaeologists piece together the past that connects all contemporary cultures today.

How do archaeologists determine how old an object is?

Relative dating methods estimate whether an object is younger or older than other things found at the site. Relative dating does not offer specific dates, it simply allows to determine if one artifact, fossil, or stratigraphic layer is older than another.

Absolute dating methods provide more specific origin dates and time ranges, such as an age range in years. How specific these dates can be will depend on what method is used.

Stratigraphy: Assuming that soil layers in a deposit accumulate on top of one another, and that the bottom layers will be older than the top layers, stratigraphy allows archaeologists to construct a relative chronological sequence from the oldest (bottom) to youngest (top) layers. Artifacts found in these layers are at least as old as the deposit in which they were found.

Seriation: a technique that was common in the mid-20th century, seriation looks at changes in certain styles of artifacts present at a site. A chronology is developed based on the assumption that one cultural style (or typology) will slowly replace an earlier style over time.

Fluorine dating: a technique that analyzes how much of the chemical fluorine has been absorbed by bones from the surrounding soils in order to determine how long the specimen has been underground.

Radiocarbon Dating: One of the most widely known radiometric dating techniques, radiocarbon dating measures the decay of the radioactive isotope Carbon-14 (C-14) in any organic material found in archaeological deposits, such as wood, plants, textiles, and human or animal remains to determine its age.

Dendrochronology: Since most trees produce a ring of new wood annually, archaeologists use the variations in cross-sections of wood to produce timelines.

Thermoluminescence: Useful for determining the age of pottery or ceramics, it can be used to date materials containing crystalline minerals to a specific heating event in the past (such as when the item was made).

Fission-track dating: A technique that determines age of various minerals and glasses based on the trails of damage done by the spontaneous fission of uranium-238, the most abundant isotope of uranium.

Potassium-argon (K-Ar) and Argon-argon (Ar-Ar): measure the ratio of argon gas in igneous volcanic rock to estimate how much time has elapsed since the rock cooled and solidified.

Archaeomagnetic dating: Magnetic particles in most materials of geological origin, such as rocks and clay, are analyzed to track shifts in the earth’s magnetic fields over time.

Select 3 or more of the dating methods defined above, or any additional techniques described in your textbook.

In eHRAF Archaeology, conduct an Advanced Search to learn more about how these dating methods have been used by archaeologists.

As illustrated below, use the subject identifier Dating Methods in Archaeology (1211) and one or more dating techniques as keywords of your choice. You may also narrow your search by selecting one or more regions or traditions, or by adding keywords for specific artifacts or archaeological discoveries that you are familiar with. 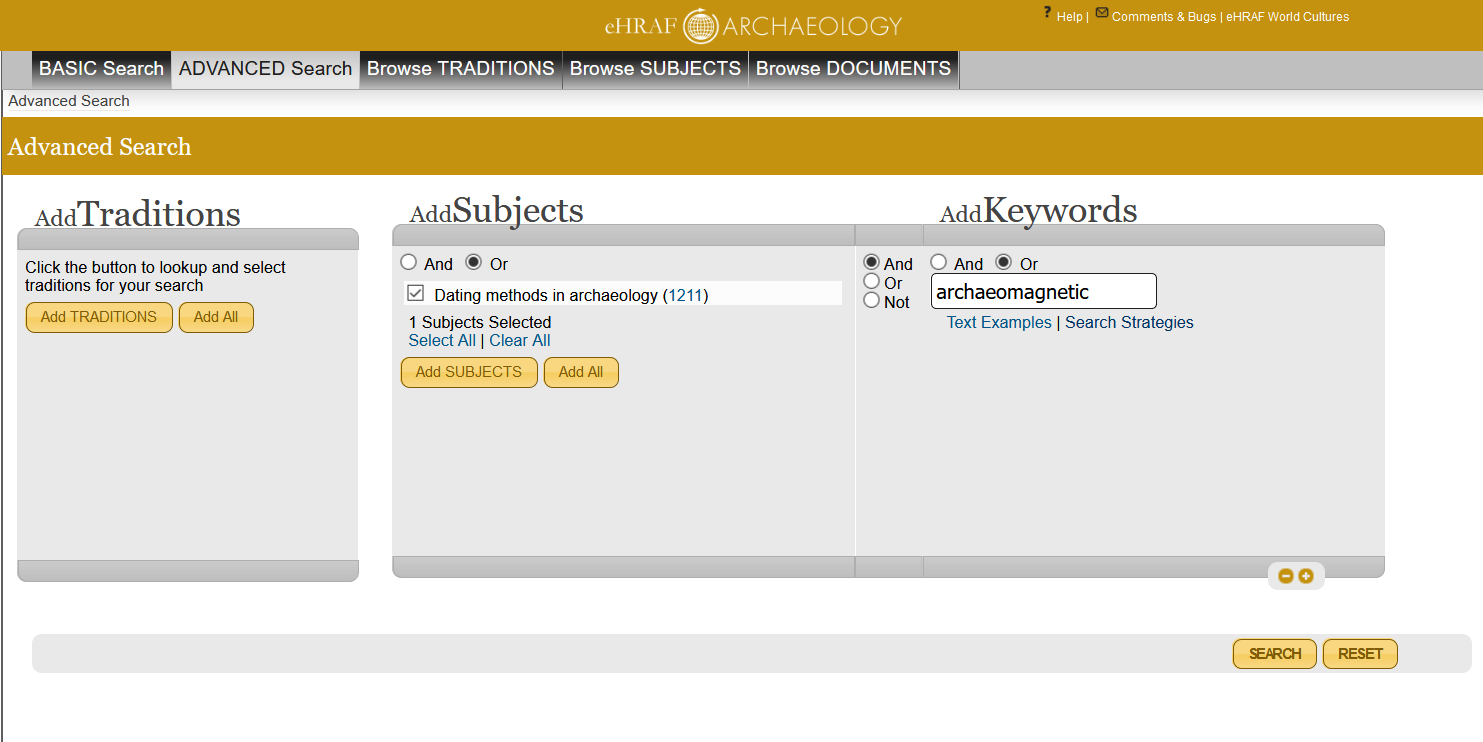 Find evidence from at least 3 traditions in different regions in eHRAF. Record your data in a table like the sample table provided below. Copy and paste the paragraph describing dating methods in the table. Be sure to keep track of which traditions and dating methods you have found, as well as the document that it came from (citation).