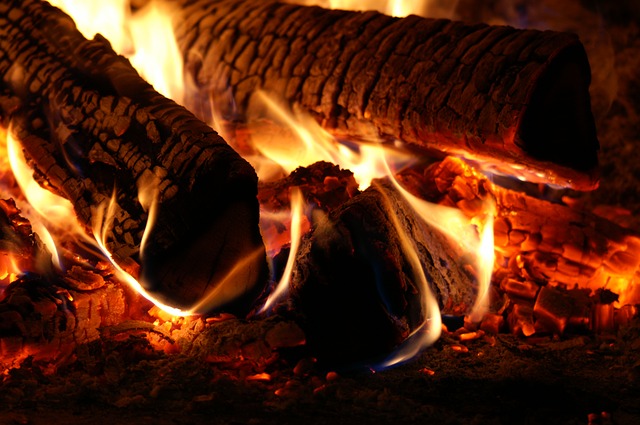 An insightful publication by Fulco Scherjon, Corrie Bakels, Katharine MacDonald, and Wil Roebroeks in the June 2015 issue of Current Anthropology sheds new light on present-day and historical fire setting practices among hunter-gatherers and foragers. In the article, the authors argue that despite myriad burning practices common in present-day foraging populations, “‘off-site’ uses have received far less attention in studies of early fire use than ‘on-site’ fire usage.” (p. 301). A significant lack of dedicated studies about fire use among ancient hunter-gatherers therefore led them to embark on a global cross-cultural study.

Within their search results, they discovered an incredible variety of off-site fire uses among hunter-gatherers. Situations involving purposeful fire-setting or burning include: the procurement of food and/or hunting; social interaction, communication and signaling (such as smoke signals); warfare; to keep away predators; and to modify the natural environment such as by stimulating the growth of specific types of plants or to clear the land. Fire is also commonly used for other social or ritual purposes like entertainment or rites (pp. 302-306).

Despite common perceptions of foragers as peoples who live simply “off the land” – collecting only what is readily available for survival without greatly modifying the environment – anthropologists have long revealed that this is not an accurate depiction. The ethnographic record of hunter-gatherer fire and burning activities is clearly very rich, and Scherjon, et al. propose that this same plentitude of contemporary evidence implies that off-site burning was even more important in the past (p. 311) as an activity common to all fire-producing hominins. However, “the antiquity of off-site fire use is seriously frustrated by the near invisibility of fire use and production” in the archaeological record (p. 312). Thus, the authors conclude their article with a call for new data to better identify fire and burning in the archaeological and geological record.

eHRAF World Cultures’ global ethnographic search is ideal for comparative anthropological studies; and, in this case, for supporting and illuminating archaeological theory with historical and contemporary context. The data enabled the authors to draw a complex and varied picture of fire use among hunter-gathering populations, finding commonalities that led them to conclude that the practice of off-site fire setting has roots into the much deeper past.

How might we look to the past to investigate further? Additional useful data from ancient and prehistoric societies can be found in eHRAF Archaeology, HRAF’s specialized online database containing books, journal articles, dissertations, and manuscripts about world prehistory and prehistoric cultures. Modeled after eHRAF World Cultures with a similar layout and navigation, eHRAF Archaeology categorizes archaeological documents into traditions organized by region. As with all eHRAF documents, the texts are also thoroughly subject-indexed at the paragraph level according to the Outline of Cultural Materials (OCM). In total, the eHRAF Archaeology database contains 94 traditions ranging in coverage from 230,000 BP to 100 BP. Every year, five archaeological traditions comprising approximately 10,000 new pages are coded and added to the database. For the list of traditions currently included, click here. 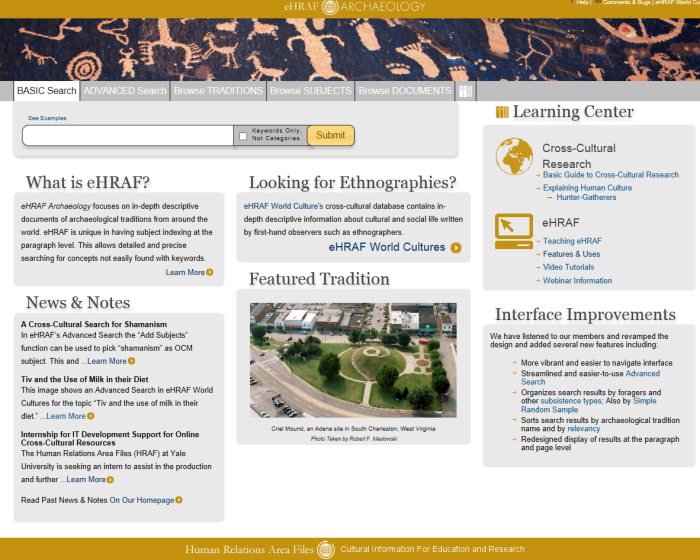 So what unique information about historical fire use by hunter-gatherers* can we uncover in eHRAF Archaeology?

It is possible to find specific uses of off-site burning among hunter-gatherer groups like those mentioned by Scherjon, et al., such as how foraging groups use fire/burning to clear the land or hunt and procure food. For instance, Crabtree, et al. (1991: 165), describe how the likely catastrophic mortality pattern of gazelle populations based on excavations at a late Natufian site in the lower Jordan Valley (11,530±1550 BP) implies “the use of a communal hunting method such as net-hunting or fire drives” as is also seen with modern gazelle herds in that region.

Similarly, Voorhies (1976: 24) found evidence among present populations at the Chantuto archaeological site in Southwestern Mexico of fire being set for the purpose of collecting turtles to eat. The turtles are normally difficult to collect because they hide in the water amongst cattail reeds; however, when the females move out of the water during the laying season, locals burn the nesting sites to procure the turtles and their eggs. She further suggests that “this procurement pattern may have considerable time depth in the study area” (ibid).

Every tradition in eHRAF Archaeology – like every culture in eHRAF World Cultures – contains a thorough content summary. Most of the summaries in eHRAF Archaeology were written by outside archaeologists for the Encyclopedia of Prehistory that was edited by Peter N. Peregrine and Melvin Ember. In addition, HRAF’s staff of analysts add a collection overview, document abstracts, and indexing notes as well as sometimes writing summaries such as the one above. They are a great place to start when you want to be introduced to a culture, tradition or the contents of the eHRAF collection for that topic. 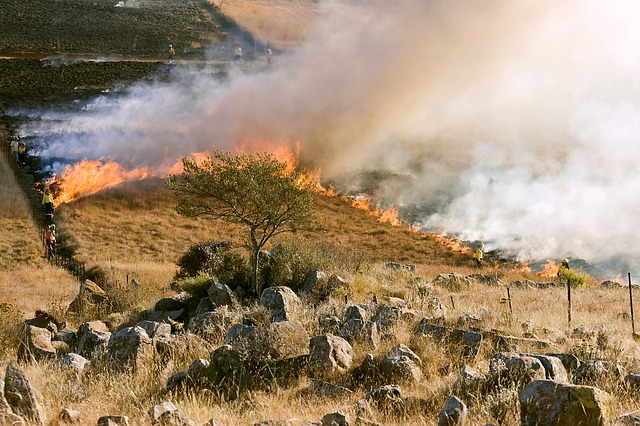 The documents in eHRAF Archaeology are also useful for situating new ideas within the context of existing theory, ethnography and archaeological findings. For instance, several sources corroborate the contention by Scherjon, et al. that historical off-site fire usage was likely commonplace among hunter gatherers, but that more historical data is needed.

One such example begins by summarizing palynologist Linda Heusser’s analysis of fossil pollen and vegetational changes reflected in the pollen record in the Santa Barbara Channel region of California:

After ca. 2200 B.P. various chaparral species became relatively more prevalent than before. Heusser suspects that climate may have become cooler and wetter during this period, reaching current conditions. However, she proposes that the increase in chaparral species may be related to an increased prevalence of fire caused by human intervention. The Chumash at the time of European contact are known to have burned purposefully lands in the coastal plain in order to propagate certain seed-bearing plants of interest, but the history of this practice has not been documented archaeologically (Glassow 1996: 107-108).

Additional studies also confirm that looking at present-day fire use can provide much-needed insight into similar practices in the past. Walker (1995: 28) arrives at a similar conclusion to Scherjon, et al. when he argues that recent fire use among hunter-gatherers in Zimbabwe for vegetation control and game drives likely indicates similar practices were common in the past, so much so that “it is likely that the vegetation during the Later Stone Age was in a constant state of flux”.

Finally, Deacon focuses at length on fire usage among Holocene hunter-gatherers in the Eastern Cape of South Africa:

In relation to plant food collecting patterns and seasonality it is of interest to speculate on the role of fire. Fire is common in the grass and fynbos communities […] If judiciously used, fire can result in advanced flowering time and increased quantity of flowers produced in certain communities. Dyer [1937:54, cited in Deacon 1976] has suggested systematic burning was introduced in recent times to prevent the spread of bush and push back the succession to grassveld (1976: 100-101).

However, referencing a related study of the effects of burning in the neighboring Grahamstown Nature Reserve, he proceeds to argue that:

Veld burning may have been consciously practised rather earlier than suggested by Dyer above and may have been a management technique of the Holocene huntergatherers. Their adaptation was to such an intractable range of animal and plant species that this procedure would appear to have been the only one whereby some control of productivity in their environment could have been achieved. […] There is good ethnographic evidence for systematic seasonal burning of the veld being traditionally practised and ecological data to indicate that the timing of the burning is important in terms of the scale of regeneration (Deacon 1976: 101).

While there is still much to discover, this particular excerpt from eHRAF Archaeology combines both theoretical and ethnographic context that is pertinent for advancing debates about prehistoric fire use among foragers.

For archaeologists and physical anthropologists interested in human prehistory, eHRAF Archaeology is a great place to start researching. Furthermore, as the selected examples above show, eHRAF World Cultures and eHRAF Archaeology together cover a broad range of cross-cultural topics on contemporary as well as past societies. This makes searching both databases especially useful when considering how present-day practices, cultures or regions compare with the historical and ancient activities, or when seeking evidence of cultural change in specific regions of the world.

* The eHRAF examples cited in this post were found using basic (keyword) and advanced (subject code + keywords) searches. Learn more about searching in eHRAF in our User Guide. Looking to recreate an eHRAF Archaeology search for fire use among foraging groups? More information on narrowing your search by subsistence type is available here.

Scherjon, F., C. Bakels, K. MacDonald, and W. Roebroeks. 2015. Burning the Land: An Ethnographic Study of Off-Site Fire Use by Current and Historically Documented Foragers and Implications for the Interpretation of Past Fire Practices in the Landscape. Current Anthropology 56(3): 299-326.