Given that the archaeological record is often incomplete, how can archaeologists make reliable conclusions about human behavior in the past? Archaeologists employ a variety of approaches to this end, using statistical, interpretive, comparative and even analogical methods to understand their research sites. One especially interesting method in this toolkit involves strategically exploring how humans behave today in order to shed light on how ancient peoples may have acted in the past. 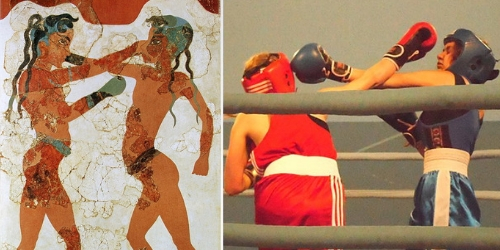 Figure 1: Many traditions look similar across the world. Using careful research, archaeologists can determine how or if traditions across the world might shed light on one another. Photo left: Two Greek boys box in “Young boxers fresco” (1600-1500 BCE), Akrotiri, Greece. Photo right: Two young women box in Estonia. Photo by Tiitstitanic via Wikimedia Commons. CC by 3.0.

In doing so, archaeologists seek to identify common conditions that shape human life in the present and then extrapolate these backward to illuminate the archaeological record. Cross-cultural researchers Melvin Ember and Carol Ember and archaeologist Peter Peregrine developed this method, called archaeoethnology, beginning in the mid-1990’s. Using the archaeoethnological approach, archaeologists research and analyze cross-cultural data on living societies in order to statistically explore the correlations that exist between human activities, environments, social organization, resource usage and more. In order for the method to yield reliable results, researchers should research human behavior across a carefully selected sample of societies. HRAF’s cross-cultural database, eHRAF World Cultures, provides one uniquely valuable tool for doing precisely this sort of research.

As in the past, so too today? Using ethnographic analogies

The archaeoethnological method can be contrasted with a method known as ethnographic analogy, where archaeologists draw conclusions about how past people behave by exploring the behavior of contemporary descendent communities. In cases where past peoples and living societies share an established historical connection, the method is called the “direct historic approach” to ethnographic analogy (Trigger 2006). In past studies, the direct historic approach has provided a number of important insights into historical processes, cultural evolution, and social change around the world. In the Maya region of Mexico and Central America, researchers have applied this analogical method to understand how ancient Maya peoples lived, worked, and thought about the world (For example see Freidel et al. 1993 Maya Cosmos: Three Thousand Years on a Shaman’s Path). Drawing from the contemporary beliefs and practices of living Maya peoples, archaeologists interpret ancient materials, artifacts, and worldviews (Vadala 2016). Researchers using this approach benefit most from using detailed case studies and making carefully researched comparisons between ancient and living peoples.

Although the direct historical method of ethnographic analogy may seem alluringly simple and straightforward, it can suffer from unique pitfalls, such as the assumption that people’s lives and behaviors have remained steady over long stretches of social time (Peregrine 2004). This is often a problem when people use hunter-gatherer societies as subject of ethnographic analogy. For example, during the 1950s and 1960s ethnographic work characterized the ǃKung (San) people as a typical peaceful hunter-gatherer society. These characterizations lead to many studies and even movies (“The Gods Must be Crazy”) portraying the San as an unchanging peaceful culture emblematic of all hunter-gatherer societies. Breaking these assumptions, Ember and Ember (1997) point out that San bands were described as frequently engaging in armed combat in the 1920s. In the 1950s, the San appeared to be peaceful, but this was probably due to government forces pacifying the area (Ember and Ember 1997). Furthermore, other studies have shown that the San people often relied on herding. This disputes the assumption that they were always a hunter-gatherer society (Schrire 1984; Wilmsen 1989). To account for similar issues, most contemporary anthropological research considers that behaviors and environments can change even in the short spans of time.

Given that dramatic transformations can occur in the span of only a few decades, how can archaeologists reliably assume that living peoples and ancient peoples separated by centuries would share practices, beliefs, and attitudes that align with one another? Thus, while the direct historic approach may indeed work well with a limited number of cultures, this method should be used with great caution.

Instead of focusing on direct historical connections, Ember and Ember’s (1995) and Peregrine’s (2004) archaeoethnological method turns to the enormous insights provided by cross-cultural studies of human social variation. Archaeologists can harness the potential of this cross-cultural research by expanding their comparisons to include the broad global patterns in human behavior, activity, and lifeways that cross-cultural anthropologists have already worked hard to establish. Using sound statistical methods and a wide variety of random samples, this form of analysis can produce highly generalized results and the findings can be significant for understanding any society—past or present (Ember and Ember 1995, Peregrine 2004). 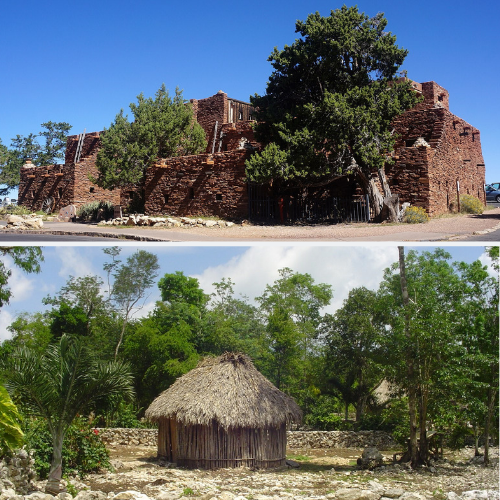 Figure 2: Dwelling size is correlated with specific residence patterns in agricultural societies across the world. Photo top: An example of a large Hopi house. The Hopi are a matrilocal society. Photo by Mario Mario Roberto Durán Ortiz via Wikimedia Commons, CC by 4.0. Photo bottom: A traditional Maya house. The Maya are a patrilocal society. Photo by AlwAshlin via Wikimedia Commons, CC by 4.0.

With this in mind, archaeologists can infer important information about matrilocal and patrilocal social organizations based on the size footprint of dwellings in the community.

How has this method been used? Examining violence and warfare

Carol Ember and Melvin Ember’s cross-cultural studies on violence provide examples of research that can be used to understand ancient human behavior and societies across the world. In “Violence in the ethnographic record: Results of cross-cultural research on war and aggression,” Ember and Ember (1997) summarize their cross-cultural approach to explore the correlations between certain types of violence and social organization. Using a sample of 186 societies around the world, a system to categorize violence, and multiple regression analysis, they explored the relationships between violence and other social factors.

One of their most important findings is that not only is more war correlated with higher fortitude and aggression training in males but more war also proceeds male aggression training (1994, 1997:7-8). This is an important contrast to the view that societies first reward violence, resulting in a higher likelihood that they will engage in warfare. Their research also shows that warfare can’t be predicted based on how complex or simple a society is; both simple and complex societies are equally likely to commit war. Intriguingly, Ember and Ember (1992, 1997:8) also found that the natural disasters that destroy food supplies strongly predict a high incidence of warfare. They note that even the threat of disasters, that is, when ethnographers report that people worry that a disaster, such as a drought, might come at any time, predicts frequent war as much as the actual occurrence of one or more disasters. 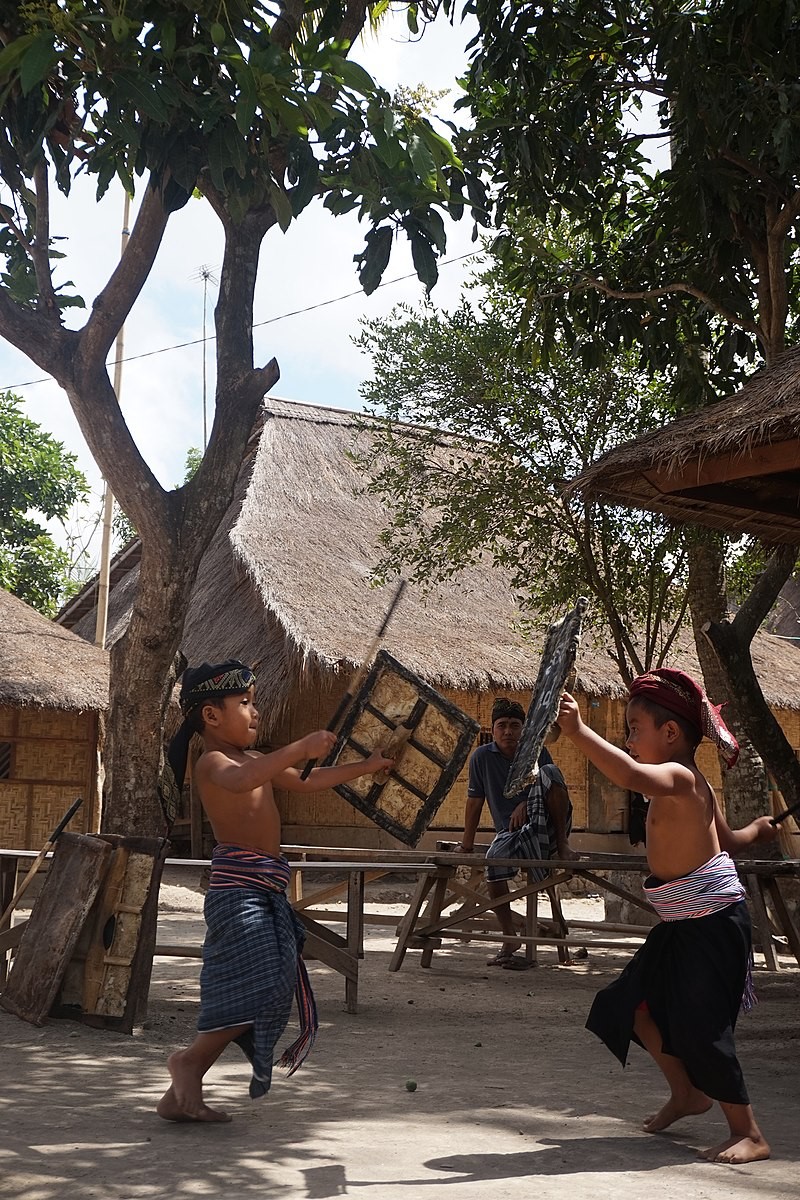 Exploring this in an archaeological context in the U.S. Southwest from about 600 to 1600 A.D., Stephen Lekson (2002:615) found that periods of warfare or raiding accompanied periods of “resource unpredictability.” In the dry southwestern context where every drop of rain is important, periods of unpredictability are periods of unpredictable rainfall. The Puebloan people living in the Chaco Canyon region viewed these periods as precursors or potential initiations to long term droughts (Lekson 2002). Horrible, long-term droughts eventually lead most Puebloan peoples near the Chaco Canyon area to abandon their dwellings in the period between 1250 and 1450 A.D. (Fagan 2005).

Using eHRAF World Cultures ethnographic collections in combination with eHRAF Archaeology collections, and The Outline of Archaeological Traditions (Peregrine 2001) scholars can get comparative studies up and running quickly. Furthermore, given that eHRAF Archaeology and eHRAF World Cultures offer such an abundant and varied dataset of cultural information, researchers can produce rich correlative studies.

Peter Peregrine, Carol Ember and Melvin Ember (2004) have argued that there are “universal patterns in cultural evolution” (2004:145) based on both ethnographic and archaeological data. Their approach uses a technique called “Guttman scaling.” Such scaling evaluates whether traits can be ordered in a hierarchical fashion such that a trait higher on the scale can predict a trait lower on the scale. For example, when studying prejudice, if a person says they would be fine if their child married someone of a different ethnic group, they would almost assuredly be fine with someone from that group living in their neighborhood, or living in their country.

With regard to cultural evolution, Peregrine, Ember and Ember built on previous cross-cultural work by Freeman and Winch (1957) who examined 52 ethnographically-described cultures and came up with 11 ordered traits they believed represented a transition from “folk” to “urban” societies. Peregrine, Ember, and Ember used a random sample of 20 archaeological traditions from eHRAF Archaeology to see if traits from the Freeman-Winch scale (those that could be measured archaeologically) replicated the Guttman scale. They did. Then the team looked to see if the Guttman scale fit 8 archaeological civilization sequences. It did. This evidence, replicated in contemporary and prehistoric societies, strongly suggests these patterns of cultural evolution are near universals (Peregrine, Ember, and Ember 2004:147). 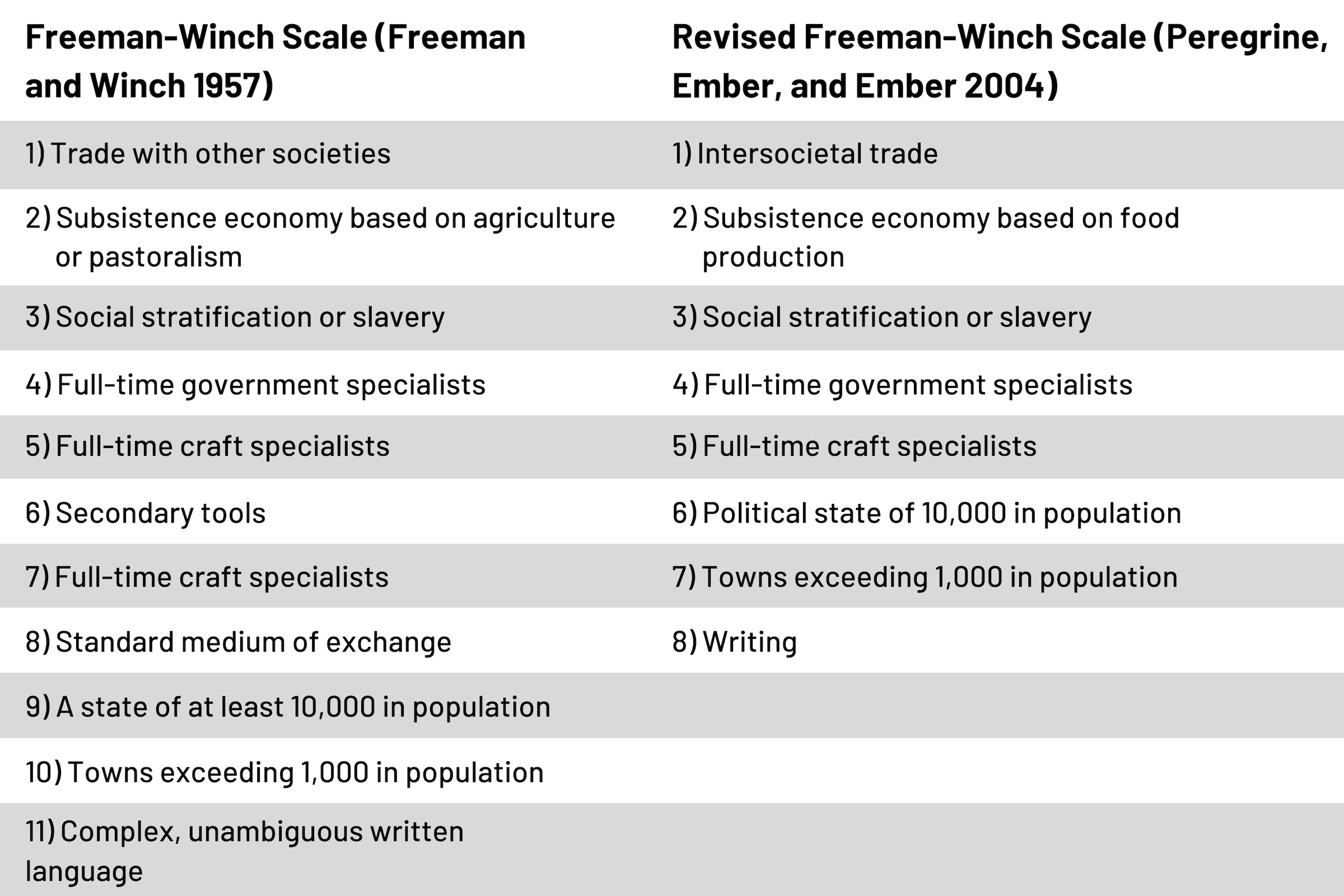 In 2007, building on this previous work, Peregrine, Ember and Ember used these scales to investigate how complex states might emerge out of simpler political organizations. After further testing the validity of their scales, they used cluster analysis to demonstrate that no singular cause or correlate determined the cultural evolution of states. Instead of a single cause or a “prime mover,” their research suggested key evolutionary processes were linked or clustered together. For example, their models show that the emergence of metal production, social classes, and towns with populations greater than 400 people were evolutionarily linked and probably co-dependent. They argued that further research should explore these clusters and why they are linked together.

In conclusion, archaeoethnography is an empirically grounded method for understanding ancient societies, and it also offers a data-driven alternative to ethnographic analogy. When used together in a systematic fashion, ethnographic and archaeological research can shed light on human conditions, practices, and forms of social organization across time and space. HRAF’s research collections and databases provide a valuable entree into such research, as eHRAF Archaeology, eHRAF World Cultures, and the open-access database Explaining Human Culture contain information on cultures, topics, and time periods around the world. With these tools, researchers can understand and explore sociocultural correlations which continue to shape history and human life.

Ember, Carol R., and Melvin Ember. “Violence in the ethnographic record: Results of cross-cultural research on war and aggression.” Troubled times: Violence and warfare in the past (1997): 1-20.

Freeman, Linton C., and Robert F. Winch “SocietalComplexity: An Empirical Test of a Typology of Societies.”American Journal of Sociology 62:46 (1957).1–466.