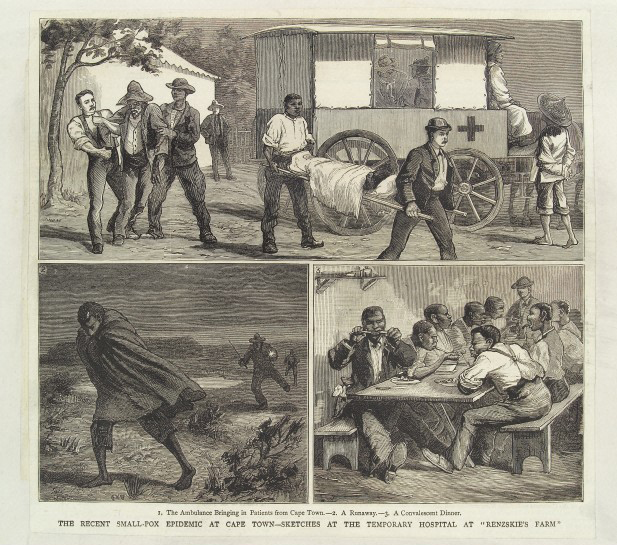 In news reports about the Ebola outbreak, traditional burial practices that involve coming into intimate contact with the corpse have been blamed for spreading the deadly disease. However, these sometimes sensational accounts (“Kissing the Corpses in Ebola Country”) distract attention away from more likely reasons, such as a country’s incapacity to deal with any health crisis due to a broken-down infrastructure and distrust of government officials in a region recently ravaged by civil war (see Paul Farmer’s “Diary”.) “Traditional” does not mean inflexible. Ebola is not the first epidemic these countries have experienced. In the ethnographic record there are many cases of people adapting their customs to avoid the spread of deadly infectious disease, including changing their burial rituals. Looking at eHRAF World Cultures, we find many “traditional” cultures that practice a different burial custom for victims of smallpox, cholera, or influenza. For example, the ethnographer Paul Hockings (1980) reports for the Badaga, living in the Nilgiri Hills of India:

Once a case of smallpox has been identified as such, all the inhabitants of that hamlet leave and make homes for themselves in makeshift huts in their fields or perhaps nearby jungle. But before leaving they quickly fence around their houses and work yards with thorn bushes, as a symbol of their hope that the disease might not follow them. Once in their makeshift homes they receive no visitors from elsewhere and visit no other hamlets, until the disease has disappeared entirely…It is only after 19 days have passed since this ceremonial re-entry that a person from a recently evacuated hamlet can either visit another or receive visitors from one: 19 days, because 18 days is said to be the maximum period between a new moon and a full one, or vice versa. Following the eighteenth day after the hamlet re-entry a communal funeral is held for all the people who have died during the smallpox epidemic. (147-8)

The Pomo of California, who normally cremated their dead, bury the victims of a contagion in a special burial ground far from the village. According to the ethnographer S. A. Barrett (1952), the Pomo “feared that cremation would liberate into the air the supernatural forces which had caused these many deaths, and that it would then attack other members of the village (404-5).” The traditional burial for the Toraja of Southeast Asia was to bury their dead in wood coffins; however, there was a different “tradition” for people who died from smallpox or leprosy.

Their bodies were buried wrapped in tree bark or bamboo. One of the reasons given for this is: “so that the sickness will not pass to other people.” The earth in the grave is stamped down well so that the evil (the sickness) cannot come out. People also say that these bodies are buried without a coffin so that they will decompose more rapidly, and with the disappearance of the stench it is believed that the danger of contagion has also disappeared. (Adriani 1951, 704)

Among the Assiniboine of the American Plains the victims of smallpox were left in their lodges which were closed off and barricaded, serving as burial tombs (Long 1961, 168). The Gros Ventre buried their dead in trees, but placed the victims of smallpox in a lodge at some distance from their camps (Flannery 1953, 201). On the Northwest Coast, the Chinook interred their dead in canoes, but during “The ‘Intermittent Fever’ Epidemic” of the 1830s, left their dead on the seashore and burned their villages in an effort to rid themselves of contamination (Ruby and Brown 1976, 186). The Chuuk of the South Pacific would burn the house with the deceased inside in order to contain infestation (Bollig 1927, 215).

The above cases were taken from the current online eHRAF World Cultures. We see in each case hygiene and prevention being practiced. A future installment includes the Fon of modern day Benin, West Africa. They too bury victims of infectious diseases in mats, with a formal communal burial held several years later. An interesting note is that for the Fon, smallpox has its own fetish to be heeded and appeased. The fetish warns against customary mourning practices, perhaps discouraging contact between the deceased and living close relatives and friends.

They recognized that corpses can leave germs in their path, especially in frequented places such as the gates of cities. It is also for this reason, we were told, that [the victims of] small pox and leprosy are buried far outside confines of home [not in family grounds as is the usual custom.] Their bodies are wrapped in mats completely naked. They are unearthed 2-3 years later…when a customary funeral rite is performed. For smallpox, the principle of hygiene certainly gave birth to this custom… Sakpata, the fetish of smallpox, forbids under pain of even more cruel ravages any weeping immediately after the demise of the victim. (Le Herissé 1911, 164; my translation)

The above examples from the eHRAF World Cultures can teach us about the flexibility and transmutability of cultural practices. We do not have to regard “customary” or “traditional” practices as written in stone. They are variable and human intelligence will adopt the better practice under changing circumstances and conditions. If that did not happen, we would not be here today!

Note: To perform a search in eHRAF World Cultures, use Advanced Search as shown in the screenshot below. In the first clause, add the subject category “Disasters,” which includes epidemics, in the text box add the words epidemic* sick* ill* and disease*. Click the AND button between Subject and Text boxes. Click the OR button in the text box. In the second clause add the subjects “Burial Practices and Funerals” as well as “Special Burial Practices and Funerals.” Click the AND button between clauses (see image below).  For more help with Advanced Search, see https://hraf.yale.edu/resources/guides/advanced-search-in-ehraf/. Not a HRAF member? Contact us for more information and a free trial. 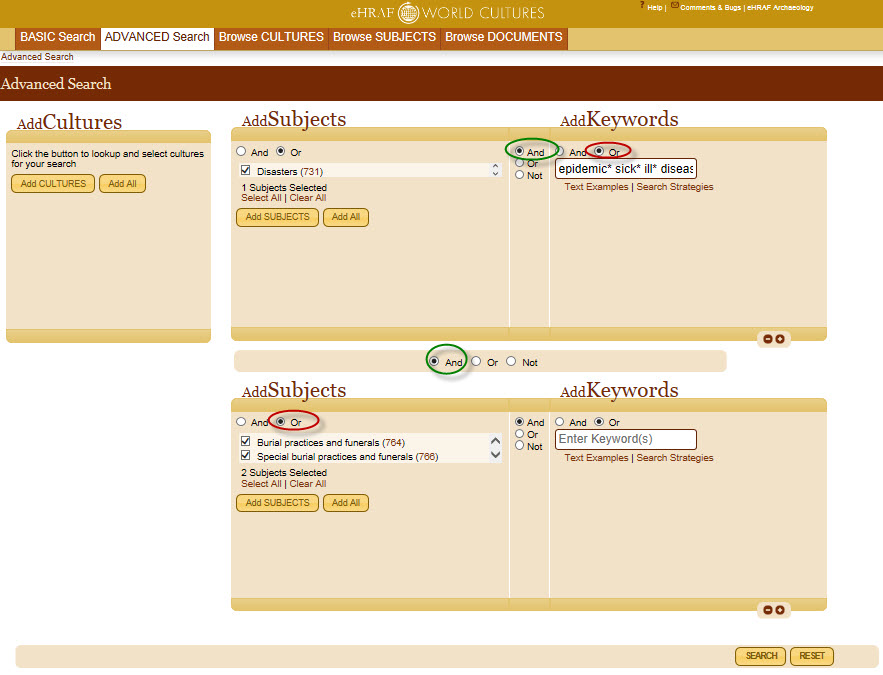 An Advanced Search in eHRAF World Cultures using OCM subjects, keywords, clauses, and Boolean OR and AND to search for ethnographic texts with info on epidemics in association with disasters and burial practices.

Barrett, S. A. 1952. Material Aspects of Pomo Culture. Bulletin of the Public Museum of the City of Milwaukee 20:1-260. Accessed from eHRAF World Cultures http://ehrafworldcultures.yale.edu, accessed October 21, 2014.