How does the relationship between gender and power vary cross-culturally? 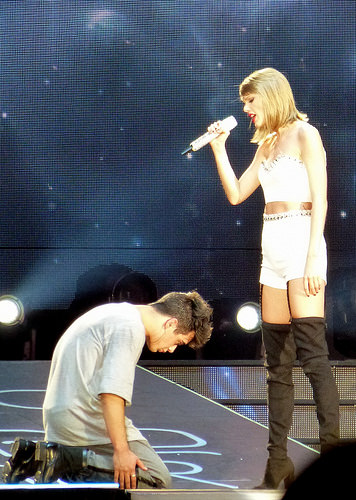 According to Forbes, Angela Merkel tops the list of “world’s most powerful women“, with Hillary Clinton and Melinda Gates labelled the second and third most powerful, respectively. In addition to politicians (and politicians’ wives), CEOs, entrepreneurs and entertainers all find a place on the list, including media mogul Oprah Winfrey, pop star Taylor Swift and youngest self-made billionaire, Elizabeth Holmes.

From billionaires to social media executives, female power according to Forbes is – as one would expect – overwhelmingly marked by monetary wealth, followed closely by ownership over powerful organizations, political leadership, having a large audience and/or being an agent for social change. For instance, eight women on the list are heads of state, 21 are in politics, 18 have founded their own companies or foundations, 24 are CEOs, and 15 are billionaires (Howard 2015).

Lists like this take it for granted that the “power” in question is tied up with global markets, in a sense measuring how effective females have been at infiltrating almost exclusively male spheres of power and influence in Western society (Forbes’ commentary notes that only 9% of Silicon Valley CEOs and 11% of global billionaires are women, with paltry statistics such as these repeating year after year (ibid.)). Furthermore, that such a list exists as a counterpoint to influential men shows how far there is still to go for gender equality.

Even among the already wealthy and powerful, gender disparity remains. Take, for instance, the example of Amal Clooney, whose established professional title of “human rights lawyer” has been swiftly diminished to “actor’s wife” in news headlines, effacing her career achievements in favor of her well-known husband. 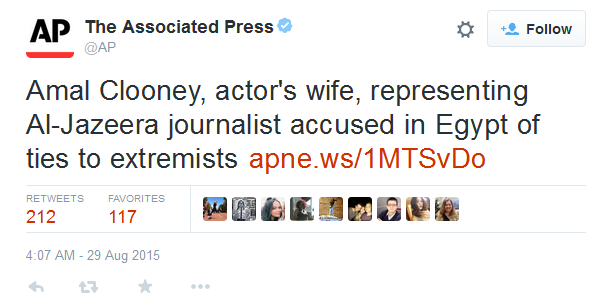 The above tweet naturally caused dismay among gender equality activists. In response to the persistence of patriarchal dominance in Western society, equality advocates have become increasingly critical of gender disparities, calling for more equal representation, opportunities and respect for women’s achievements. Yet observing women’s power anthropologically can offer additional insights about gender and power. Anthropologists have long observed gender roles and concepts of female power in diverse cultural contexts.

Are there cultural commonalities for what makes a powerful woman across different societies? What other means for measuring female power exist besides those relied upon in the West?

Let’s see what the ethnographic record from eHRAF World Cultures has to share about female power and how it is manifested around the world.

Gendered power relations are multifaceted, typically varying over time and with age and status (see, for instance, Kerns 1985: 96). Even where women play a more domestic role and where men appear to have greater day-to-day freedoms, women’s actual rights and abilities in society can be much more flexible.

For example, historically, Tsonga women in South Africa have had comparatively strong rights in marriage when compared with women in neighboring communities:

First, husbands could not maltreat wives; second, wives had the right to sexual gratification; third, they had the right to luxury items, beyond subsistence, if available; and fourth, they could dissolve a marriage, if both parties agreed (though the woman bore the cost). This is a remarkably liberating series of rights in the southern African context, and all of them pertain today, in modified form. The third issue, rather outdated now, has its modern counterpart in a new form: if a man becomes a migrant and is absent for a continuous period of four years, or fails to support his wife by sending remittances, she may end the marriage (Webster 1991: 259).

Similarly, in Cambodia, while patriarchal authority is accepted as the de jure system, the de facto role of women is significant, leading Ebihara to characterize the relationship between the sexes and spouses as “virtually equal”:

The husband is technically the supreme authority who is owed deference, respect, and obedience by his family. But the peasant wife is by no means a totally docile and submissive creature. Her role in the maintenance of the family is critical and her activities are varied; she has primary responsibility for the care of the children and household; she is coworker in the fields; she oversees and keeps the family budget; she shrewdly handles many financial transactions and often undertakes her own commercial ventures to earn money; she owns and can dispose of property in her own right; she assumes explicit legal authority over the household when her husband is dead, absent, in capacitated, etc. As a result, the wife and mother exerts considerable authority, both overt and covert, within her family (Ebihara 1968:113–14, quoted in Frieson 2011: 177).

In fact, Frieson further explains that the idea of a male head of household was likely introduced to Khmer society during the French colonial period along with colonial legal frameworks in Cambodia. Conversely, linguistic genealogy suggests a feminine connection with the term for household head in the Cambodian language (Frieson 2011: 177). Ethnographic accounts such as these reveal that the indigenous reckoning of female power is often one where women hold a substantial amount of control both overtly and “behind the scenes” of male power. 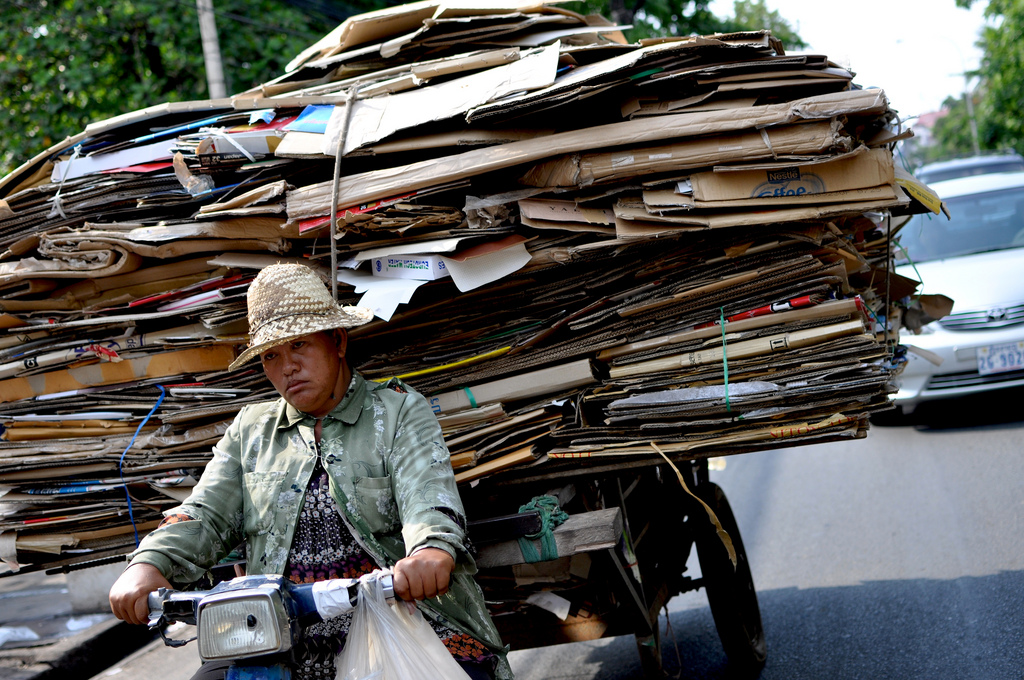 A woman transports a load of cardboard in Phnom Penh, Cambodia. Photo by gardnergp

This apparent paradox of female power is seemingly common to many societies around the world (including in the West). The suggestion is that while men have the official, political and judicially sanctioned authority in society, women wield other obvious or even underhanded powers over the men, thereby holding the “real” control.

In an account of Tamil society, Susan Wadley explains the perception among informants that “only if the wife gets the upperhand can the family prosper”:

Tamils believe that the wife would win any marital battle: only women’s self-control allows them to submit to men. But by submitting, they further increase their powers. Hence the noble, bound woman will in fact control her husband, who even though he is controlled by nature, cannot match the cultural control of a bound, ordered woman. Men should control women if and when they (women) do not control themselves. But the self-controlled woman—the chaste, noble woman—will ultimately control all (Wadley 1991: 160).

Despite assertions of female control, one questions to what extent these accounts of female power are simply reworked accounts of male power cloaked to placate those in a subordinate position. Still, further evidence of the female power paradox can be found in the Mediterranean and the Middle East. Friedl (1994: 151) takes up the issue as seen from Iran, where,

women are said to be subordinate to men, second-class citizens, oppressed, veiled, and confined, unequal to men legally and in access to resources. […] Yet, on the level of everyday life and popular culture, Iranian women, especially mature matrons, are widely perceived as ‘powerful.’ They are described as running the political affairs of their sons and husbands, as controlling the lives of everyone in the household —omniscient, beloved, respected, and feared matrons much like the stereotypical Jewish mother of western folk culture.

Is it possible to be oppressed and powerful at the same time? Friedl argues that there is no contradiction for Iranian women: “not only can be both oppressed and powerful simultaneously, but that they can derive power to effect changes in their own and in others’ affairs from the very relations of inequality that define their position” (ibid.).

Thus, it is not only in the boardroom or running a global media empire that women can be legitimately powerful. Even in restricted or oppressed conditions, women assert authority and control in many ways, from command over household affairs to seeking economic independence through formal or informal education and careers. They can do so by leveraging access to areas of society where men have little to no interest or jurisdiction into greater agency for themselves and other women. Where freedom and equality for women is not an expectation, both individual and collective efforts to enable female advancement become all the more important.

A final example from eHRAF World Cultures comes from the work of Nigerian anthropologist Ifi Adamiume, who reflects on her experiences of women’s political groups in Britain compared with her ethnography of Igbo women (Amadiume 1987: 183). She describes how in the UK, local government authorities have instituted committees to represent women’s interests in local politics that have the ability to influence policy. Unfortunately, “racism, class and even sexual politics divide the women in the Units and Committees”, with a majority of local women feeling “alienated by the very élitist policies, structures and priorities” and therefore less likely to participate. Her contrast with Igbo society is telling:

In comparison to the struggles of African women in local politics, women in the West are privileged in terms of funds and opportunities, which they do not seem to know how to handle. Igbo women will say of them, ‘The dog with a tail says that human beings, blessed with buttocks, do not know how to sit.’ (Amadiume 1987: 183).

Globally, power for women is not always equated with access to financial gain, fame, or political influence as seen in the West. Instead, female power resonates differently from place to place and culture to culture. Commonalities include that powerful women are recognized as able to pursue the fulfillment of life goals, protect their personal interests, and secure the safety of themselves and loved ones, even in oppressed conditions. Women everywhere likewise affect change in their lives and the lives of others in ways that would not attract the attention of Forbes magazine. 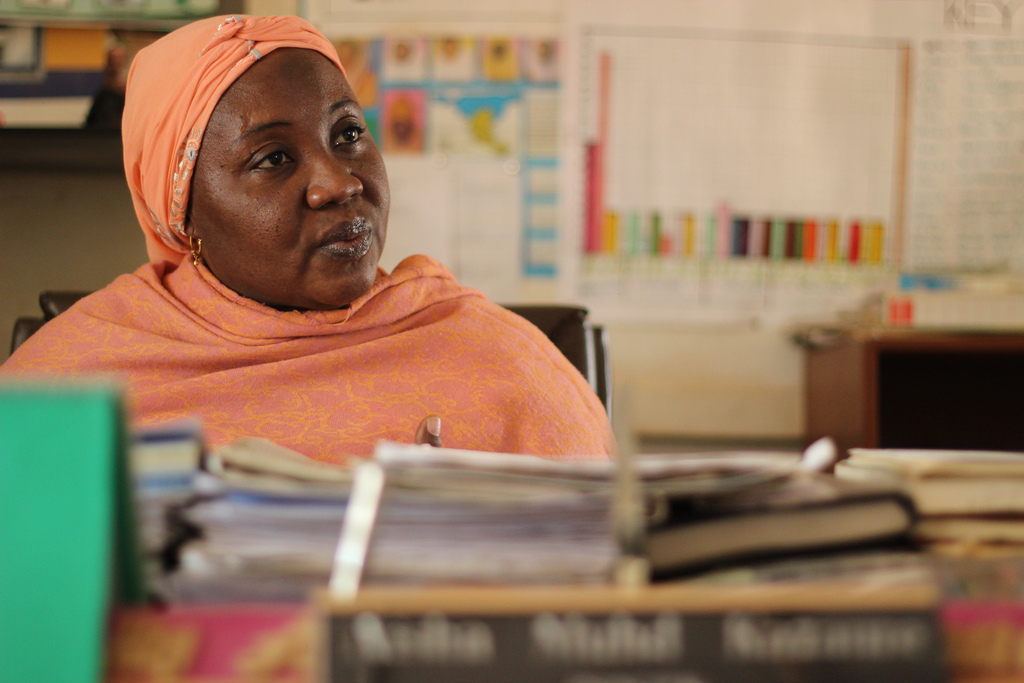 Aisha, principal of Jigawa State School of Midwifery in Nigeria, hopes to have trained 200-300 students who will work within the region to save mothers’ and babies’ lives. Photo by DFID – UK Department for International Development

The ethnographic examples in this post are just the tip of the iceberg on female power and gender relations in eHRAF. Sign in to eHRAF World Cultures to begin your own search. Note that you can follow the links in the references below to view publication information, including abstracts and eHRAF coded data provided by HRAF analysts, for each of the texts mentioned.

Friedl, Erika. 1994. “Sources Of Female Power In Iran.” In The Eye Of The Storm : Women In Post-Revolutionary Iran. London: I.B. Tauris Publishers. http://ehrafworldcultures.yale.edu/document?id=ma01-096.

Frieson, Katie, John A. (John Amos) Marston, and May Ebihara. 2011. “No Longer A ‘Happy Balance’: The Decline Of Female Status In Khmer Village Culture.” Anthropology And Community In Cambodia : Reflections On The Work Of May Ebihara, Edited John A Marston. Caulfield: Monash University Press. http://ehrafworldcultures.yale.edu/document?id=am04-189.