On Friday, February 18, Dr. Ember participated in the panel discussion “Past Presidents’ Reflections on SCCR”, which was co-chaired by Judith Gibbons of Saint Louis University and Deborah Best of Wake Forest University. She also had the honor of being presented with the SCCR Lifetime Achievement Award. The award was presented by Alyssa Crittenden of University of Nevada, Las Vegas.

Here is the transcript of the introduction from that event:

It is my honor to present the Society for Cross Cultural Research award for Lifetime Achievement to Dr. Carol R. Ember (B.A. Sociology-Anthropology, Antioch College; Ph.D. Social Anthropology, Harvard University, under the direction of John and Beatrice Whiting).  She was a research Assistant for John Whiting for many years in the Department of Social Relations at Harvard. She went through the ranks of Assistant, Associate, to Full Professor in the Department of Anthropology at Hunter College of the City University of New York.

She is currently the President of the Human Relations Area Files, a position she assumed in 2009. She is also the Editor in Chief of the journal Cross Cultural Research.  Carol was also one of the directors of the Summer Institutes in Comparative Anthropological Research. 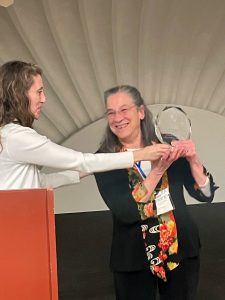 She has been in many leadership roles across multiple societies. So many, in fact, it sort of boggles the mind as to how she had the time to be in such demanding roles and continue to publish, obtain grants, and maintain the Human Relations Area Files. Some of these roles have included being the President of the Society for Anthropological Sciences, a society who has recently named their book prize, the “Carol R. Ember Book Prize”. She has been nominated for the President of the General Anthropology Division, American Anthropological Association, the Society for Psychological Anthropology, and the Cultural Evolution Society – a society for which she currently sits on the executive board.

Of course, Carol was instrumental in the founding of the Society for Cross Cultural Research and was one of our society’s earliest presidents. She has attended all 50 meetings.

She has received more than a dozen large and high profile grants from external funding agencies including her current grant from NSF, entitled “Infrastructure for Knowledge Linkages from Ethnography of World Societies”.

She has authored over 100 peer reviewed articles and edited a large number of books and volumes, several with her late husband Melvin Ember. What is so notable about these books, several of them textbooks, is that they cross subdisciplines. I don’t know very many people who can say that they have written very successful textbooks in cultural anthropology, biological anthropology, and archaeology.

She has been cited well over 11,000 times and is a Fellow in the American Association for the Advancement of Science.

Carol’s research has been instrumental in the discipline of Anthropology as well as outside of it in adjacent fields.  For her doctoral thesis, she went to Kenya to work and study children’s behavior among the Luo. She has studied a wide range of topics, including variation in marriage, family, descent groups, and war and peace. Her most recent interdisciplinary research, supported by the National Science Foundation, has been on the effect of natural hazards on culture.

Carol’s illustrious career has focused on highlighting how important cross-cultural research is. Her work has advanced our understanding of human behavior and culture across temporal and geographic space. She has been central to our society and to cross cultural research for more than 50 years. Please join me in congratulating Dr. Carol Ember on receiving the lifetime achievement award from the Society for Cross Cultural Research.

Please join us in congratulating Carol Ember on this prestigious honor!