A recent article from NPR, Lost Posture: Why Indigenous Cultures Don’t Have Back Pain, prompted us to see what we could uncover in eHRAF World Cultures that would shed more light on indigenous approaches to posture. The article suggests that bodily postures among indigenous populations result in better spine health in those societies compared with that of Western peoples – in this case, Americans – who are argued to have poorer posture due to less strenuous lifestyles. It highlights the efforts of acupuncturist Esther Gokhale’s who attempted to cure her own discomfort by traveling to the distant reaches of the world to observe the lifestyles of indigenous peoples with low levels of reported back pain.

A cross-cultural study of sorts, Gokhale’s self-serving exercise has found a broader audience as a first of its kind:

Scientists don’t know yet, says Dr. Praveen Mummaneni, a neurosurgeon at the University of California, San Francisco’s Spine Center. Nobody has done a study on traditional cultures to see why some have lower rates of back pain, he says. Nobody has even documented the shape of their spines. “I’d like to go and take X-rays of indigenous populations and compare it to people in the Western world,” Mummaneni says. “I think that would be helpful.”

It may be true that no singular, comprehensive cross-cultural study of posture in relation to reduced levels of back pain exists, but anthropologists have determined that humans are capable of at least 1,000 body positions (see The Anthropology of Posture, available at Scientific American). And research into human posture is not new: an extensive, global ethnographic record of how human populations around the world sit, stand, and recline is at our fingertips in eHRAF World Cultures.

Whether you start with a basic keyword search or follow the Advanced Search tips outlined here, there is much to learn about posture in eHRAF. Let’s see what we can find. 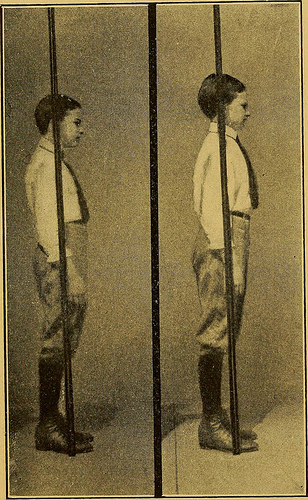 In many societies, good posture is so important that great attention is given to instilling it from childhood. Most familiar for residents of Western societies, parental corrections to “stand up straight” and “stop slouching” are widely recognized as advice passed on by elders to children. A straight back is seen as healthy, attractive and strong, while slouching is seen as unattractive and unhealthy.

The Abkhasian people in Georgia take this posture training further. They traditionally use a special cradle as a child’s first bed: “All those who use the cradle were unanimous that being strapped for so many hours and months at a time in a straight position on the back ensures good posture, still highly regarded in the Abkhasian concept of beauty” (Garb 1984: 121). While there appears to be little evidence that this tradition does indeed create better posture, its use continues among younger generations, indicating that posture is as much about culture and habit as it is about balance and health.

In eHRAF, ethnographic descriptions of standing, sitting and lying down can be very detailed, usually as part of a wider cultural study rather than one tome devoted to the spine or posture, which is why some researchers may have trouble finding such examples for a comparative study. Luckily, eHRAF World Culture’s expert coding system helps narrow down thousands of pages to reach paragraph-level results for “postures” (OCM code 516).

For instance, Musil (1928: 64) describes Bedouin sitting and reclining habits in some detail:

How Finnish Lapps sit in their huts is similar; either on the floor with their legs crossed in front, or with their knees almost touching the ground while they sit on the left heel. The latter is the typical position of young women when cooking or feeding their babies (Itkonen 1948: 272). 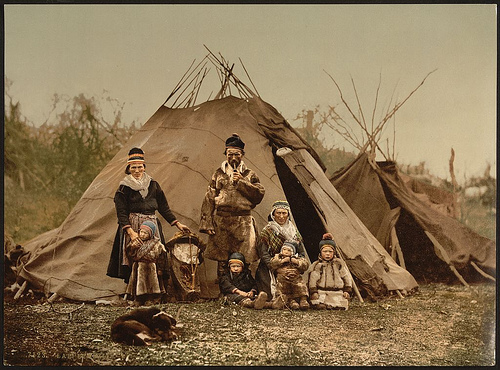 Lapp Family. Photo by The Library of Congress

Evidence from eHRAF World Cultures also suggests that sitting and squatting appear to be far more common postures around the world than standing up straight or sitting with one’s back vertically against a chair. This is so much the case that some peoples even have trouble standing up for long periods, as Gusinde and Schütze found among the Yaghan of Tierra del Fuego:

They are somewhat unsteady when they stand; either their torsos are constantly swaying back and forth slightly, or they very inconspicuously move from one leg to the other. … They do not remain in an upright position for more than a few minutes. If they have a choice, they soon squat on the ground again, because they can rest better that way (1937: 378-9).

On the contrary, Westerners are not used to squatting and sitting low upon the floor. In other places, there are detailed formalities around how to sit and squat (as well as stand), including when and where it is appropriate to do so. There are often distinct rules for men and women and people of different ages or statuses in society. For instance, for the Ainu people (indigenous to both Japan and Russia), “women squat sitting on the heels when out of doors, and on the floor with knees drawn up, to near the chin in the case of old women. Men occasionally squat outside, but it is correct to sit cross-legged indoors” (Munro 1963: 81).

In sitting on the ground, a man rests on his heels with his legs drawn under the buttocks, his knees apart. Often, especially outdoors in warm weather, men squat on the flat of their feet, the knees drawn up below the chin close to the body. In front of a campfire or stove and in a tent men generally recline, resting on one elbow, the legs outstretched. All three of these postures are avoided by women. A woman typically sits on her heels with her legs drawn straight under her, the buttocks resting on her ankles and calves, her knees close together. In other words, she sits while kneeling. Often a woman kneels as she works, her buttocks only slightly resting on the calves of her legs, the knees close together. Young girls, especially if they wear slacks, often assume less conventional positions (Honigmann 1949: 232-3). 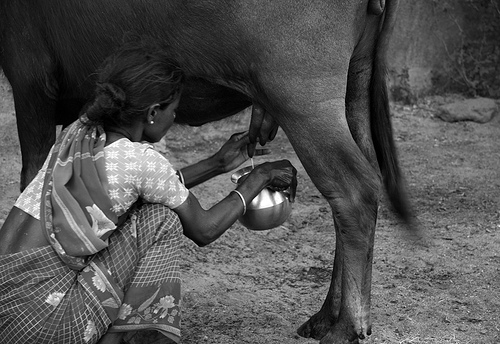 To outside observers or visitors, the muscle development required to enable regular squatting at ease quickly becomes apparent, as this ethnographer relates:

Even now, when the Aleut are familiar with the use of chairs and stools, many of them, particularly the women, perform their household tasks squatting on the floor. This is also the usual posture when at leisure … The usual position is to sit on the heels, clasp the hands around the knees, or rest the chin on them. In this position the Aleut rests his whole foot on the ground. The author was unable to attain such a position and always fell on his back when attempting to do so. To sit on the heels as do the Aleut one must have well developed leg-muscles capable of keeping the trunk in equilibrium; besides the Aleut curve their backs and drop their heads forward to assist in balancing themselves. Apparently the use of this posture by many generations of Aleut has made them adept at assuming it. Not only are they not fatigued thereby, but they seem to find it restful after their work (Jochelson 1925: 43).

Written in 1925, Jochelson’s reflections on how the indigenous Aleut’s well-developed muscles and posture enable them to squat comfortably for long periods actually foreshadow the findings of doctors in the timely NPR article linked above. The NPR article concludes that lack of back pain throughout indigenous cultures is not due to inherent differences in spine shape across populations, but is behavioral and developmental – i.e. due to cultural behaviors that affect physical development over time:

Everyone knows that weak abdominal muscles can cause back pain … “You’re not going to be able to go from the S- to the J-shaped spine without having good core muscle strength. And I think that’s key here.” So indigenous people around the world don’t have a magic bullet for stopping back pain. They’ve just got beefy abdominal muscles, and their lifestyle helps to keep them that way, even as they age.

You can learn more about how to search eHRAF for cross-cultural data on posture here.